The clients for the contract killings turn out to be part of cult/sect involved in human sacrifices.

Jay and Gal have been set up to remove members who’ve become involved in child molesting/sex slavery They lure both hit-men into a trap, whereupon they both have a run in with several of their more fanatical members. Gal is fatally injured by the cultists/sect, and Jay is forced to finish him off.

Jay flees home, only to find cult/sect members have followed him back to his house. They have been stalking both men during their jobs.

Jay is forced into a fight to the death with one of their hooded hunchback members, who, on dying, is revealed to be Jay’s wife, with their son tied to her back. 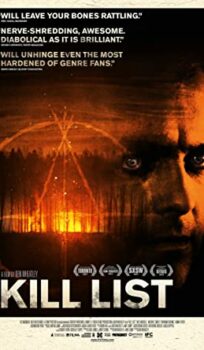