Joyce Palmieri (Penelope Ann Miller) and her son Dominic are actually Rachel Crisp and Cullen Crisp, Jr., ex-wife and son of the drug dealer Cullen Crisp (Richard Tyson), whom John (Arnold Schwarzenegger) has been trying to put behind bars. Crisp and his mother Eleanor (Carroll Baker) conspire to successfully kill the chief witness of a murder he committed, and her death releases Crisp from his holding cell scot-free. He and his mother both immediately head to Astoria.

During a school fire, Crisp enters and locates Dominic, revealing to him that he is his father. John and Joyce hunt down Cullen Sr. to the school’s locker room, where he tells John that Dominic is HIS son and for him to get his own family. He readies his gun at John, but John’s ferret, hiding in Dominic’s coat, comes up and bites Cullen Sr. in the neck, incapacitating him long enough for John to shoot him dead.

Cullen’s mother Eleanor shows up and shoots John in the shoulder while Dominic and Joyce hide. John slips away while Eleanor sees the dead body of her son. She would find and confront John in another shower room, twice demanding to know where her grandson was, and John refused to tell her both times. Before she can kill him, John’s partner Phoebe (Pamela Reed), whom Eleanor earlier knocked out by hitting her with her car, shows up with a baseball bat and clubs Eleanor unconscious. The police take Eleanor away while John goes to the hospital, his kindergarten class showing much concern. While recuperating, Phoebe visits him, and he finally acknowledges her as his partner.

When well enough to move, John returns to the kindergarten class to the delight of all of the students, and Joyce comes out of her 3rd grade class to meet up with him, and the two kiss while the kindergarten students cheer.

*Also, John aids another student, Zach, during the movie. After noticing bruises on his legs and his anti-social behavior, John confronts Zach’s mother and learns from her that Zach was being physically abused by his father, and so was she. John warns her that if her husband hurt Zach again, he was pressing charges against him. After Zach comes to class one day with a severe welt on the back of his neck, John takes immediate action, confronting Zach’s father outside the school and punching him in the stomach, and telling him he was pressing charges against him for abuse. 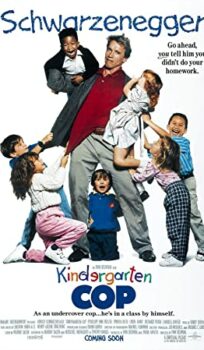