Fred Wilson (Robert Armstrong) captures Kong, and puts him on display in a garish public spectacle. Kong escapes his chains, grabs Ann Darrow (Fay Wray), and climbs the skyscraper that most resembles his home–the Empire State Bulding. Once there, an all-out attack by military aircraft mortally wounds the ape. Kong gently places Ann down, and falls to his death. Denham arributes the ape’s fall to his infatuation with Ann, but in a perfect example of hubris, can’t seem to appreciate the fact that it was his own desire for glory that killed Kong.

This movie was remade in 1976, and word is that Peter Jackson is working on another, for an anticipated 2005 release. 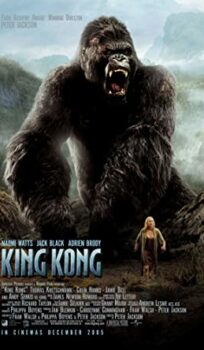