Frank White (Christopher Walken) is a released drug lord who realizes that even though he plans to retake the drug trade it is inevitable that he will be killed and wants to do one good thing before he dies. Thus, he plans with his crew to consolidate the drug trade by killing off uncooperating competitors and funnel the money to help build a hospital in a poor district of NYC.

However, a friend and member of his organization Joey (Paul Calderon) sells out Frank and his crew to rogue cops lead by Dennis Gilley (David Caruso) and Thomas Flanigan (Wesley Snipes) who kill most of Frank’s men.  Frank’s top lieutant and closest friend Jimmy Jump (Laurence Fishburne) kills Flanigan and then is killed by Gilley. Frank murders Gilley the following day at Flanigan’s funeral for Jimmy Jump’s death. When Frank finds out Joey sold him out, he has him killed.

Frank then confronts Roy Bishop (Victor Argo) and explains that he is not the problem; the men he killed did unspeakable things he did not approve of and that he is just a businessman who gives people what they will consume with or without him.  Bishop and Frank get into a shootout in the subway and Bishop is killed.  However, Frank was mortally wounded in the process and dies in a taxi as police surrond the vechile. 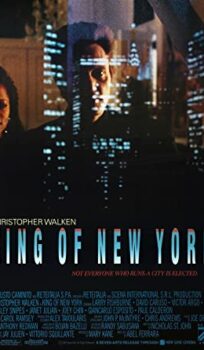