Lear (Patrick Stewart) disowns his youngest daughter Claudia when she refuses to prove her love for him in exchange for a large inheritance.Susannah (Marcia Gay Harden) and Rebecca (Lauren Holly) have no such moral qualms and begin to divide up Lear’s huge cattle ranch.

The two daughters quickly turn on their tyrannical father though, and drive him off his own land. He goes mad and is rescued by his friend Westover (Roy Scheider), who takes him to where Claudia has taken refuge – with Menchaca; the smaller land baron Lear has a long-standing feud with.

Susannah and Rebecca plot (at the urging of Rebecca’s husband) to take Menchaca’s land from him.  Westover warns Claudia and is tortured by the elder daughters (they burn out his eyes) in an effort to learn what he told Menchaca.  In the assault, Claudia is killed and Lear (now repentant of his prideful ways) dies of grief. Westover’s deceitful second son and Rebecca’s husband are also killed. Susannah’s husband returns to town and is horrified by what has happened.  He arrests Rebecca and Susannah kills herself rather than be captured. 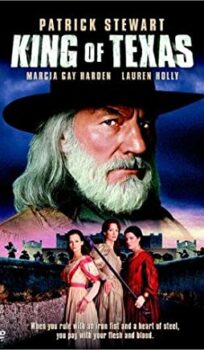