In the late 1980’s, Richard Williams (Will Smith), his wife Brandy (Aunjanue Ellis), and their five daughters live in Compton, California, where he is a night shift security guard and she is a nurse. When not working, they are training their two youngest daughters, Venus and Serena, to be professional tennis players. Richard has been preparing them for this their whole lives, even going so far as to write a 78-page plan mapping out their lives and careers. He knows that he will need to hire a professional coach to further their training, but no one will take them on despite creating brochures and videotapes of their practices.

Richard’s persistence finally pays off when Paul Cohen (Tony Goldwyn), the coach of pros John McEnroe and Pete Sampras, agrees to watch them. He sees that Venus and Serena have what it takes to make it as a pro, but he won’t coach both for free. Richard chooses Venus for Paul to coach since she is older, and Serena will continue to be coached by Richard and Brandy. Paul says Venus will improve if she plays in Junior tournaments, so Richard agrees to let her sign up for them. She’s very successful in these tournaments, but Richard won’t allow her to brag about her wins, insisting that she show humbleness. Even Serena signs up for a tournament, and she shows some success as well.

Despite Venus’ success, the Williams, who are black, are looked down upon by the predominately white tennis world. This is also apparent when sponsors come calling, trying to sign Venus to a contract. Sensing she is going to be taken advantage of, Richard turns down all of the offers and pulls her out of the Junior tennis circuit. After Paul tells Richard that this will destroy any chance of Venus turning pro, Richard fires him. Later, Richard convinces another coach, Rick Macci (Jon Bernthal), to watch Venus and Serena. He agrees to coach both of them, and he even accepts Richard’s counteroffer of paying for the entire family to move to Florida with them.

Now in Florida, Richard reminds Rick that neither Venus nor Serena will be playing in any Junior tournaments, something he failed to mention to Rick back in Compton (he knew Rick would say no if he did). For the next three years, Venus and Serena are constantly training against Rick’s other students, including his star pupil Jennifer Capriati, while the tennis media wonder if Richard is doing this for the good of the girls or for his need for media exposure. After Venus tells Rick that she’s ready to turn pro, Rick finally convinces Richard to allow Venus to accept an invitation to play at the 1994 Bank of the West tournament in Oakland. But once Richard learns that Jennifer, who is only one year older than Venus, was arrested for drug possession and quit tennis due to burnout, he changes his mind and won’t allow her to play in Oakland.

This decision strains Richard’s relationships with his family and Rick. Venus even begins thinking her father no longer thinks she can be a pro. But after a long conversation between Richard and Brandy about letting Venus start to make her own decisions about her career, Richard again allows her to play in the tournament. Richard tells Venus that he wasn’t sure if she was ready to be the latest inspiration of all black girls, but he now knows she is. Now in Oakland, the family takes a meeting with Nike the night before her first match. Nike is offering her $3 million and her own shoe line, but the family, against Rick’s advice, turns it down. They say that all future offers will be more lucrative once everyone sees Venus play. The next day, Venus struggles early in her match, mostly due to nerves, but she settles down and wins.

Her next opponent will be Arantxa Sanchez Vicario, the #1 player in the world. By this time, Nike has upped their offer to $4 million. Rick says Venus isn’t ready for players like Sanchez Vicario and to take the offer, but the answer is still no. In that match, Venus dominates her opponent and wins the first set. Up 3 games to 0 in the second set, Sanchez Vicario calls a timeout to use the bathroom. Rick knows this is just a ploy to cool down Venus, but it’s not illegal. The plan works because once Sanchez Vicario returns, Venus has lost her momentum. Sanchez Vicario goes on to win the next 12 games in a row and wins the match. After the match, Richard and Brandy comfort a dejected Venus, telling her they are proud of her. They leave the stadium, only to be met by a large crowd of supporters cheering for her. Rick also tells Richard that several shoe companies now want to make an offer.

Title cards at the end of the movie, accompanied by videos of the real Williams family, say that Venus signed a deal with Reebok nine months later for $12 million. By the year 2021, Venus had won Wimbledon five times and was the first black woman in the Open Era to be ranked #1 in the world. 2 years later, Serena turned pro, and by 2021, she had won 23 Grand Slam tournaments and is considered the greatest tennis player of all time. Both Venus being #1 and Serena being the greatest of all time were mentioned in Richard’s 78-page plan. 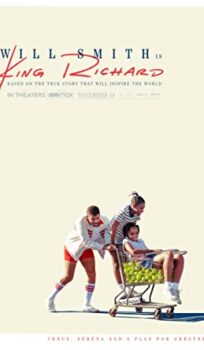