Kathy O’Brien’s (Anna Lee) father has disappeared searching for the legendary lost treasure of King Solomon’s mines.  She steals a wagon from explorer and hunting guide Allan Quatermain (Cedric Hardwicke), to search for her father.  Quatermain and his hunting clients go after her.  When they find her, client Henry Curtis falls in love with her.  Curtis insists they continue the search.  The map indicates that they must cross a deadly desert.  Quatermain states no human can survive crossing it, but native Umbopa (Paul Robeson) leads them across.

They are captured by a hostile tribe that has been guarding the entrance to the mines for centuries.  Coincidentally, Quatermain speaks the language of this hidden tribe that he has never encountered.  Umbopa reveals the he is the rightful heir to the throne of this tribe, but his father was killed by a usurper.  Most villagers will side with Umbopa against the cruel new king, but the villagers fear the witch doctor.  Unless they have stronger magic than the witch doctor, the explorers will all be killed.  Conveniently, they carry an almanac, and in a stroke of luck, it shows there will be a total solar eclipse the next day at noon.  Quatermain warns the tribe he will magically turn off the sun.

When the sun darkens, the tribe joins Umbopa in rebellion.  Curtis kills the evil king.  O’Brien goes into the mine and finds her father hidden in there.  The rest of the group follow them in.  The witch doctor caves in the mine entrance,  to trap them in (the witch doctor dies in this cave in).  Umbopa and the villagers dig a new hole to rescue them.  As they exit, the mine passages fill with lava from a hidden volcano, and the treasure of the mine is lost forever. 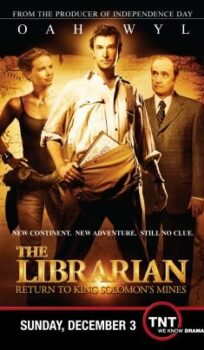