Charlie Price (Joel Edgerton) gets dumped by his fiancée Nicole (Jemima Rooper) for the realtor Richard (Geoffrey Streatfield). But that’s okay because he hooks up with the perky Lauren (Sarah-Jane Potts), who loves Northhampton as much as Charlie.

Lola/Simon (Chiwetel Ejiofor) moves to Northhampton to work in the factory full-time and leaves the stage behind.

A few other points of interest:

To get Don off of Lola’s back, she decides each of them will write down one action for the other to do to show each other what it takes to be a ‘man.’ Don wants to arm wrestle Lola as he is the reigning champ for 5 years running. Lola lets Don (Nick Frost) win the arm wrestling contest so that he continues to be respected in his town and factory. Lola wants Don to change his mind about someone. Don changes his mind about Charlie and gets the workers back to finish up the boots for Milan.

Lola and Charlie have a fight after Charlie finds out that Nicole was cheating on him with Richard by having dinner at a restaurant. (Charlie sees Richard in the loo. Richard rushes out of the loo without washing his hands. A couple quickly rushes out of the fancy restaurant with Charlie wondering why. Charlie finds the Chimmy Choo shoe that Nicole wanted in the street.) The picture widely shown of Charlie in thigh-high red boots is of him in Milan on the catwalk because Lola didn’t show up yet with her dancers from the club. Eventually, she does show up and steals the show. 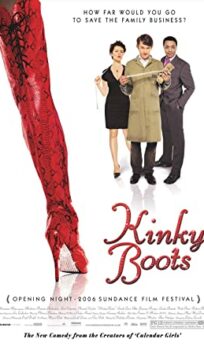