It is revealed that the two separate occasions in which both Molina (William Hurt) and Valentin (Raul Juliá) ended up sick, was all part of a plan between Molina, the nefarious Secret Police Chief (Milton Gonçalves) and the prison’s Warden (José Lewgoy), with the intention of drawing them closer, so that, eventually, Valentin would trust Molina enough to provide him with secret information about the subversive Leftist group Molina belonged to. In turn, Molina would be offered early parole, if successful. Furthermore, Molina wasn’t supposed to eat the poisoned food that one time, but confessed that had to, to avoid suspicions.

However, a true friendship comes to flourish between the two men, with Molina falling in love with Valentin and manipulating the Warden for treats the two of them would actually share together. When Molina unexpectedly is paroled, the night prior to his departure, he declares his true feelings to Valentin and, off-screen, they apparently make love. The next day, Valentin, visibly smitten by his cellmate and friend, gives him a phone number to contact his group comrades and they both share a passionate farewell kiss.

Out of prison, Molina calls the number and makes an arrangement for a meeting with the group. Unbeknownst to him, though, the Secret Police had been tailing him and, because of their sudden appearance at the meeting, a gunfight breaks out; thinking he betrayed him, the revolutionaries shoot Molina. He briefly wanders around, badly wounded, until the Secret Police Chief forces him into the back of a vehicle and coerces him into disclosing the number in exchange for his life being saved; but Molina doesn’t give in and laughs one last time before dying. His body is tossed off in a dump and it is publicly informed that “he was one of the Leftists and was willing to go to any necessary lengths to collaborate with them”.

Meanwhile, a badly beaten Valentin is given a high dose of morphine by a sympathetic doctor “to help him sleep”. The final sequence is a heavy implication that this could’ve been a merciful killing, since he visibly doses off into unconsciousness but, suddenly, Marta (Sônia Braga) appears to take him away and they wind up cavorting and boating together in some tropical paradise. 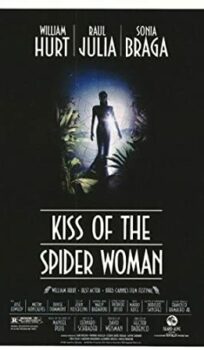