SHORT VERSION:
When Joe, Eric, and Gwen finally face the succubus, Eric recites another random passage from his spell book in an attempt to vanquish it, and the succubus growls and writhes before running off into the woods. Ronnie then appears, having earlier escaped an attack from the succubus that cost Hung his life, and he checks out the spell book and informs Eric that the book is the long-lost Sigillum Aemeth, a grimoire that contains spells capable of summoning demons. He summoned the succubus with it through the ritual he had to do to let Joe into their LARP game, and the last passage he just read has only served to turn it into the much stronger Abominog. Joe soon decides that they must destroy this demon to avenge Hung and prevent it from feasting on any of the other LARPers, so they all arm themselves with real weapons from Eric’s private stash and head to the field where the Battle of Evermore is being held.

Abominog reaches the field first and kills most of the LARPers as well as a group of paintballers when they show up to ruin their game. The quartet arrive soon after, and they – along with Gwen’s LARP-crazy cousin Gunther – do battle with Abominog, during which the demon burns the spell book to ashes and kills Ronnie. Joe then takes the still-intact gem from the book’s spine, and after getting confirmation from Eric that the gem combined with singing is what makes the magic work, he hands Eric a CD of his favorite doom metal songs and tells him to play the second track on the CD player in the paintballers’ truck. He sings the song at Abominog, and as he does, the gem fires magical blasts at the demon that harm it. The spirit of Hung then magically appears, and he helps Joe slay the demon before returning to the afterlife.

Joe and Gwen become a couple, form a doom metal band, and vow to never LARP again. Gunther is now always in his LARP character because he fought a real demon, Ronnie was posthumously recognized as “Game Master Extraordinaire”, Eric finally became a Level 27 Sorcerer, and Hung’s battle with Abominog became the stuff of legend.

LONG VERSION:
Hung (Peter Dinklage), Ronnie (Jimmi Simpson), and Lando (Danny Pudi) eventually cross paths with the succubus, and Hung – under the influence of magic mushrooms he earlier consumed – recognizes her true form under her human appearance and tries to attack her, but she winds up killing him. She also makes mincemeat out of Lando, but Ronnie escapes. Shortly afterwards, Joe (Ryan Kwanten) and Gwen (Summer Glau) find the dead bodies, and then Eric (Steve Zahn) and Gunther (Brett Gipson) show up. Joe surmises that Ronnie must have killed them, but Gunther (who genuinely believes that he is a real warrior and has completely immersed himself in the fantasy realm of LARPing) draws the conclusion that the ritual Eric had to perform to let Joe into their LARP game has brought forth a real evil that has tainted Joe and made him kill them, but Gwen assures him that Joe is innocent. Gunther tells the others that they must avenge their fallen comrades, and Eric replies that they will have to head back to his van and get into his supply of real metal weapons, and he tells Gunther that they can arm themselves while the others get help. Elsewhere, Ronnie is running around aimlessly and trying to make sense of what he just saw, but then he randomly realizes that Eric’s ritual must have brought forth the creature, so he decides to find him and warn him.

As the quartet reach the van and Gunther digs into the weapons supply, they are suddenly surprised by Eddie (D.R. Anderson), a fellow LARPer. After telling him that some weird things are happening and people have turned up dead, they ask for his cell phone so they can call 911. Eddie replies that they would be better off calling the sheriff since 911 will just route a cell call, so they do so and explain that there is a serious problem happening at the LARP gathering in the state park. After the sheriff hangs up, we discover that he and his deputy are the antagonistic paintballers Jake (Brandon Petty) and Tommy, who are looking to get revenge on the LARPers for a past confrontation that resulted in their friend Randy (W. Earl Brown) getting passages from Eric’s spell book branded onto his face when it leapt up at him under its own power. Jake telephones Randy and tell him to get his cousin and his gear and he will pick them up shortly.

After Eddie notices Gunther brandishing an actual sword, Gunther demands to know where the other LARPers are, and he replies that they are all camped out on the “battlefield” where the Battle of Evermore is going to be held. Gunther then runs off in the direction Eddie pointed towards, intending to combat the evil at its source, and after Gwen forces Eddie to give her proper directions to the battlefield, she takes a sword and goes after Gunther since she can’t leave without him. This forces Joe and Eric to follow her, and Eddie takes off in a different direction to find and tell Ronnie that he believes that the quartet are all on drugs.

Joe, Eric, and Gwen soon discover that the succubus has attacked and killed Eddie when they catch it feasting on his body. It then gets up and almost mesmerizes Joe, in part because it resembles his ex-girlfriend Beth (Margarita Levieva), but Gwen runs it through with her sword and pins it against a tree. The demon then speaks the very words Eric spoke to Joe before he performed the earlier ritual, and Joe realizes that this must be the evil being that was let loose, and it took on Beth’s form since he was holding a picture of her and him at the time of the ritual. Gwen orders Eric to recite a passage from his spell book to send the succubus back to where it came from, but since Eric is not fluent in the Enochian language in which the book is written, he sings another random passage like before just after the succubus gets free, and the succubus growls and writhes before retreating into the woods. As Eric gloats over how he apparently vanquished the demon, Ronnie suddenly appears and takes a look at the book. After finding out that Eric read what he just read, Ronnie informs the group that the book is the long-lost Sigillum Aemeth, a grimoire created several centuries ago that contains spells capable of summoning demons. He tells Eric that his earlier ritual brought forth the succubus, and the passage he just read has only served to transform it into Abominog, a larger and more powerful demon that eats souls.

Soon after, the newly-created Abominog yowls, waking the LARPers Winston (Sean Cook) and Ira (Kim Stodel) at the battlefield. Thinking that the robotic dragon Ronnie made for the battle is approaching, they believe that the Battle of Evermore is starting now and blow the Horn of War to awaken the other LARPers. Joe and company overhear the horn, and knowing that Abominog will head for the battlefield and make a buffet out of the LARPers, Joe convinces the others (especially a very hesitant Eric) that they must face and destroy this demon and save the LARPers as well as avenge Hung. They all head back to Eric’s van and dig into his stash of weapons, and after adequately arming themselves, they run off to the battlefield. Moments later, Ira blows another horn to start the battle, which the four friends overhear and follow it in the direction it came from. Gunther, too, hears the horn and does likewise.

In the midst of the battle, the paintballers drive in with their truck and start shooting paint on everyone, but then Abominog appears moments later and slaughters all of the paintballers and most of the LARPers. Joe, Gwen, Eric, and Ronnie make their arrival after the initial wave of carnage ends, and they initially take cover behind the paintballers’ truck. As Ronnie attempts to start the engine, Joe asks Gwen if she would like to go out with him if they survive this, and she kisses him and agrees to. Gunther then shows up and saves Winston from Abominog before his friends get the demon’s attention, and Gunther spots Randy’s severed head and notices the Enochian text on his face. As Abominog moves toward Joe, Eric, and Gwen, Eric tries to find the banishment spell Ronnie marked out for him in the book, and then Ronnie gets the truck started and backs it into Abominog. He sandwiches the demon against the earlier overturned robot dragon, and Gunther follows up by stabbing Abominog through the hand and into the dragon for added reinforcement. Eric begins to sing the banishment spell, and Joe loads a bazooka he finds in the truck bed with a bunch of rocket-tipped arrows that Gwen brought and shoots them into Abominog’s mouth. Eric stops singing when he sees that the demon is preparing to send the shot back with a fiery blast, and he gets in front of Joe and Gwen and shields them with the book, causing the book to get burned to ashes and his clothes to catch fire. Ronnie and Gwen switch places so Ronnie can put out Eric with the truck’s fire extinguisher, and afterwards, they recover the book’s gemstone, which is the source of its power. After Ronnie yells to the others that they need a banishment spell, Gunther leaves and returns with Randy’s head, but as Ronnie starts to sing the passage on it, the truck stalls and Abominog gets loose. The demon kills Ronnie, but before he dies, he throws the gem to Joe and tells him that it is up to him now.

After Joe gets confirmation from Eric that the gem combined with singing is what makes the magic work, he hands him a CD with his favorite doom metal songs on it and tells him to play the second track on the truck’s CD player, which is the song he was going to sing to Beth before they split up. He gets on the truck’s hood and starts singing the song at the demon, which causes the gem to start shooting magical blasts at the creature that harm it. Suddenly, a red portal opens up above everyone, and out of it comes the spirit of Hung, who proceeds to slash up Abominog with his sword until he and Joe finish it off by striking it in the chest with a combined slash and magical blast. Hung then disappears back to the afterlife while Abominog burns and melts away back to where it came from.

Six months later, Joe and Gwen – who are now a couple – are seen rocking out on guitars together in his room. The following texts state that they both formed a doom metal band and have mutually vowed to never LARP again. Subsequent texts also reveal the fates of the other principal characters: 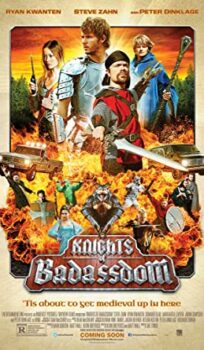