Pooper:
The women torture Evan, but don’t kill him. Instead, they bury him in a grave up to his neck, upload a video of him having sex with Bell to Facebook, and leave the house with Evan’s dog.

Long Ending:
The film opens on a happy family including Evan (Keanu Reeves), his wife, and two kids. Although Evan loves his family, he is clearly frustrated by the lack of sex life, his wife’s devotion to her career as a famous artist, and that they are going away without him during Father’s Day weekend. Nonetheless, Evan buckles down to finish a project for work over the weekend.

That night, Evan hears a knock on the door. He opens it to find two attractive young women drenched by the pouring rain. The women are named Genesis (Lorenza Izzo) and Bell (Ana De Armas). They explain that they were trying to get to a party but can’t find the house. Evan lets them in and gives them his computer and phone to contact their friends. They say that they got the street name wrong, which explains how they ended up there. Evan orders a car through Uber that will take 40 minutes to get there.

The next morning, Evan is deeply regretful. He is outraged to see that the women have trashed the house and are eating a ton of food for breakfast. They consistently ignore his requests to leave and even try to appear on camera while he video-chats his family. When he threatens to call the police, they claim that they are underage and that he has committed statutory rape. However, the girls agree to leave when Evan calls the police despite their claims. Evan then cleans up the house and gets back to work.

Later that night, Evan hears a crash and is knocked out when he goes to investigate. He awakens tied to the bed with Genesis wearing his wife’s clothes and makeup. Bell enters the room dressed in his daughter’s school uniform and calling him “daddy.” They demand he have sex with Bell while they tape the encounter. Evan relents after they slap him around, but only so he can use the act to wrench his arms free of his restraints. Evan attacks the girls, but they stab him in the shoulder (where he recently had surgery) and he passes out from the pain.

When he awakens, they have tied Evan to a chair and force him to participate in a twisted “game show” (by almost deafening him with extreme noise when he refuses to play). It’s also revealed that they had been following him on social media before coming to his house. One of his wife’s colleagues comes over to get some of her art for an upcoming exhibition and quickly realizes something is wrong. To distract him from calling the police, the girls begin destroying the artwork. In the ensuing commotion, the co-worker slips and cracks his head open on the base of a statute. The girls simply laugh at the co-worker’s death and then declare that Evan must die at dawn. They dig a grave for Evan while he unsuccessfully tries to get loose from his bonds. They also completely trash his house.

They eventually bury Evan up to his neck in the grave as he alternatively insults them and pleads for his life. They say they won’t kill him if he tells his wife what he’s done. He agrees and they call her, but he only screams for her to call the cops. The girls muted the phone, expecting Evan to renege on his promise. The girls say that he has lost the game and pretend that they are going to crush his skull, but then break out laughing. They then upload the sex video between Evan and Bell to Facebook. They say they have played this game many times before and that while Evan lasted the longest pre-seduction, no husband/father has ever won. As Evan screams in outrage as the sex video tape on his phone, the girls leave the house (with Evan’s dog) to find their next “participant” in their game. 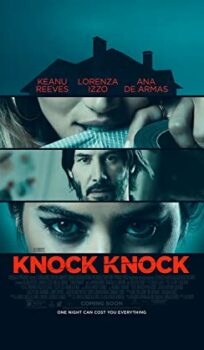