Submitted by Steve B

In 1959 Lucinda (Lara Robinson) had aliens whisper the dates, body counts and coordinates of major world disasters over the next 50 years until the end of the world which is October 12 2009. She wrote the dates down but could not finish it and put them into a time capsule that the school buried and would be opened on the schools 50th anniversary along with other students pictures of what the future would look like. Lucinda went missing and was found in a closet etching the final numbers into the door with her fingers.

50 years later, John Koestler (Nicholas Cage) is a professor of astronomy at MIT. He makes it to the anniversary and his son Caleb receives Lucinda’s letter. John looks at the paper and sees 0911012996 which is September 11 2001 and 2996 was the death toll in the terrorist attacks. He stays up all night and circles certain numbers which were the exact dates. While in a traffic jam he figures out that the other numbers were coordinates and witnesses a plane crash..

John tries to find out more about Lucinda, as her name was written on the envelope, but she died of an overdose years ago. He finds her daughter, Diana and granddaughter. They go to the mobile home where Lucinda died to find more clues with Caleb and Lucinda’s granddaughter, Abby. When John and Diana are in the mobile home, mysterious men approach the car but Caleb honks the horn to scare them off. John and Diana discover EE which means Everyone Else as the body count.

John goes back to his lab to discover that a solar flare will take out the first 3 planets in the solar system including Earth.

The gang of 4 decide to go to caves to see if the can survive. Diana takes off with the kids while John is finding out what Lucinda’s last message was, scratched on a door in the school 50 years ago. At a gas station, 2 of the mysterious men take the car with the kids inside and Diana is killed in a car accident after she steals a truck and his taken out by a oil tanker.

John finds out the final coordinates are to Lucinda’s mobile home. He goes there and finds car tracks into the forest. He finds Caleb and Abby with two white rabbits, and Caleb says only people who can hear the call can go with the mysterious men who turn out to be aliens. The aliens take certain people (no reason is given on why who gets picked). John gives Caleb his locket which has a picture of John, Caleb and John’s wife who was killed in a fire a few years ago. After an emotional goodbye, John goes to see his sister and parents. As they have a group hug, the solar flare takes out the planet up to a mile deep in the Earths crust.

The film ends off with the kids dropped off in a field on another planet. 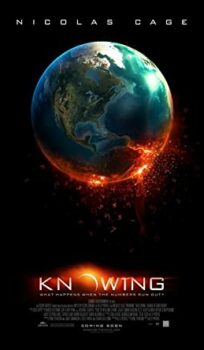