Knute Rockne (Pat O’Brien) comes to America from his native Norway with his family in the late 1800’s.  As a child, he learns and falls in love with the game of football.  As a teenager, Rockne (a.k.a. “Rock”) works in a post office to earn enough money to go to college at Notre Dame, then a small midwestern college.  Rock is a chemistry student and left end on the football team.  As a player, he and a teammate develop the forward pass and use it to upset perennial powerhouse Army.  After graduation, Rock accepts an offer to join the faculty at Notre Dame as a chemistry teacher, as well as head coach of the football team.  Now married to his college sweetheart Bonnie, Rock enjoys several years of teaching and coaching, but the burden becomes too much for him and he decides to quit teaching and concentrate full-time on coaching.

During his coaching tenure, Rock led Notre Dame to 5 National Championships and coached several all-pros and future NFL stars.  His most famous players were George Gipp (Ronald Reagan) and the backfield group known as The Four Horsemen.  Gipp was a halfback for Notre Dame who died suddenly of a strep infection.  On his deathbed, Gipp tells Rock that when the team is down, to have them win one for the Gipper.  Several years later, at halftime of a game against Army where they are losing, Rock tells the team the story of George Gipp and tells them to win one for the Gipper.  The inspired team then goes out and wins the game.

In March of 1931, Rock is flying to California when his plane crashes in a field in Kansas, killing him instantly.  The movie ends with his memorial service and tells that several of his assistant coaches and players later went on to become head coaches themselves. One of them, Elmer Layden (one of the Four Horsemen), eventually becomes head coach at Notre Dame. 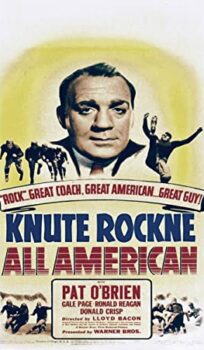