George Kuffs (Christian Slater) is a high-school dropout who has just left his pregnant girlfriend Maya (Milla Jovovich).  His brother Brad (Bruce Boxleitner) is the owner of a Patrol Special police franchise in San Francisco.  In that city, the districts have private owners, and they offer a subscription security service (which is similar to a private police force).  One day, Kuffs tries to hit up Brad for a loan, but Brad offers him a job with the Patrol Special instead.  Before he can decide whether to take his offer, Brad is shot to death by a local mob hitman named Kane (Leon Rippy) for not accepting his bribe.  Kane is arrested, but is later released due to lack of evidence.  In Brad’s will, the district and the Patrol Special franchise are left to Kuffs.  Local businessman Sam Jones (George de la Pena) offers to buy the district from Kuffs, but Kuffs turns him down in order to use the Patrol Special to get Kane.  However, the local businessmen don’t want Kuffs to run the Patrol Special because they think he doesn’t have what it takes to protect them and begin canceling their subscriptions.

Since Kuffs has no police training, he agrees to attend the police academy during the day and ride with a police liaison (Tony Goldwyn) named Ted at night.  Instead of following their patrol route, Kuffs has Ted follow Kane all the time.  During a stakeout, they learn that Kane is a business partner of Sam Jones.  One day, Kane signs up for the Patrol Special subscription with the orders to look the other way.  Since he needs the money to keep the business afloat, Kuffs accepts the obvious bribe, but continues to harass Kane.  When Kane goes to Kuffs’ apartment to kill him, he and Kuffs get into a gunfight that leads to Kane’s death.  With the hitman dead, the local businessmen realize that Kuffs does have what it takes to protect them and sign back up, which saves the business.  Meanwhile, Maya runs into Kuffs, and she sees that he has changed from the person who runs away from responsibility.  They eventually get back together.

With Kane dead, Kuffs turns his attention to Sam Jones.  Jones and Kane were stealing expensive paintings and were going to use the proceeds from selling those stolen paintings to come into power in the city through corruption.  With Ted’s help, Kuffs follows Jones to the meeting site for the sale.  Kuffs and Ted get into a gunfight with Jones and his henchmen as well as the buyer and his henchmen.  Kuffs and Ted kill the buyer and most of the henchmen (a couple of them surrender), but Jones gets away.  Kuffs follows him to a nearby parking garage, where Jones shoots Kuffs, but Jones is then killed by Ted, who was following both of them.

The movie ends a year later.  Kuffs, fully recovered from his wounds, got his GED and also graduated from the academy.  He and Maya got married, and she gave birth to their daughter.  He still owns the Patrol Special, which is thriving, and he earned enough money to buy another district. 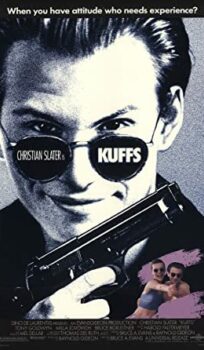