Condensed Version:
Lord Shen drove out the Pandas when Po was a baby and is shown in a flashback to have hunted Po’s mother down. Po uses the inner peace form to redirect Shen’s cannonballs back at his fleet. Shen then attacks Po, who avoids all his attacks, causing Shen’s master cannon to collapse on top of him. In a distant panda village, an elder panda awakes from meditation, saying that his son is alive.

Detailed Version:
The Furious Five are captured by Lord Shen (Gary Oldman) and held to be made a public example of his power. Po (Jack Black) recovers with the help of the Soothsayer (Michelle Yeoh), who helps Po remember how Shen drove his family out of their home when he tried to rid the land of all pandas to prevent the Soothsayer’s prophecy of Shen’s empire being brought down by a warrior of black and white. Po finally manages to execute Master Shifu’s (Dustin Hoffman) inner peace form perfectly. In doing so, Po fully remembers his natural mother leaving him as a baby in a radish box so that the wolves would not find him. His last vision of her shows her distracting the wolves and Shen away from baby Po’s location.

Po returns to the city to free the Five, who join him in battle against Shen along with masters Ox and Croc (Dennis Haysbert and Jean-Claude Van Damme), who claim to have been persuaded by Master Shifu, who also shows up to lend a hand. They all go against the forces of Shen, who kills his right hand wolf in order to fire the cannon and release his fleet. Tigress (Angelina Jolie) takes the hit for Po as it was revealed that her muscles do not allow her to feel pain.

Po stands alone against a fleet of Shen’s ships, but he realizes that he can use the motions from the inner peace exercise to redirect all the cannons projectiles back at the ships. He takes out Shen’s master cannon with an extensive redirect, concluding with a trademark “Ska-doosh!” Shen is baffled that Po could find inner peace after all that was taken from him by Shen. Po explains that inner peace is about letting go of your pain, but Shen still feels the need to fight. Briefly, Po avoids most of Shen’s attacks as he cuts the support ropes to his master cannon, which falls on top of him, destroying the ship as Po jumps away.

The lands are saved once again thanks to Po. He returns home to his adopted father’s noodle house and tells him that he is the best father anyone could hope for. Far away, an elder Panda awakes from meditation saying, “My son is alive,” and the camera pans out to a village populated by pandas. 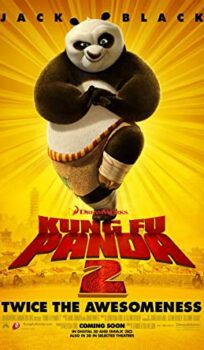