Short version:
Po becomes a master warrior/dragon warrior by using his special traits as a panda.  He defeats the escaped Tai Lung.  The dragon scroll is blank, there is no “secret ingredient” to fighting kung fu.

Longer version:
Po the panda (Jack Black) wishes he could be a kung fu expert instead of working at his family’s noodle restaurant.  One day, the old turtle kung fu master Oogway decides to choose the “dragon warrior” and to everyone’s surprise, chooses him.  The kung fu masters, the Furious Five, are unhappy that Po was chosen even though he has no kung fu skills.  The Kung Fu trainer Master Shifu (Dustin Hoffman) tries to make him quit but he won’t.  They eventually accept him.  Master Shifu learns that he can be trained if motivated by food.

Everyone is in danger from Tai Lung.  He was originally trained by Master Shifu but turned evil.  He wanted to be the dragon warrior, but Oogway would not give him the necessary dragon scroll.  He was imprisoned for terrorizing the valley but escapes.  The Furious Five try to fight Tai-Lung, but they fail.

Po does complete his training and receives the dragon scroll; but he sees that it is blank.  He realizes that there is no “secret ingredient” to fighting kung fu.  He defeats Tai Lung with his special skills as a panda (his fat tummy keeps him from being immobilized) and by using the Wuxi finger hold (which he figured out by himself). 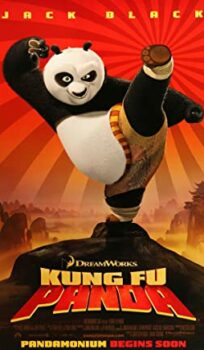