While The Chosen One (Steve Oedekerk) is fighting Master Pain/Betty (Fei Lung), the Evil Council – comprised of French aliens – appear in their spaceships to aid Betty. The Chosen One uses his magic tongue, “Tonguey”, to destroy the head spaceship, and that causes the others to retreat. He then makes a leap for both of Betty’s protective caps on his body. He grabs hold of both, but Betty attempts to kill him by palm striking him in the heart. The Chosen One is knocked backwards by the force, but he rips the caps off in the process, and Betty dies a most painful death. The Chosen One, having planned this out from the start, takes out a flattened (but comically still alive) squirrel out of his coat that he had positioned where Betty struck him, so it acted as a shield to absorb Betty’s blow. The Chosen One gives the flattened squirrel his reward of peanuts, and a relieved Ling (Ling Ling Tse) comes up and embraces Chosen. 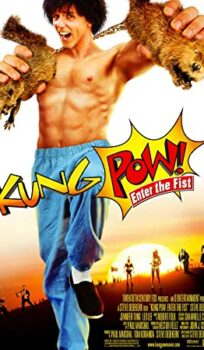