Fellini’s film won the first ever Academy Award given for best foreign film.

Gelsomina is a simple minded teen girl from a large poor family. Her mother sells her to Zampano (Anthony Quinn), a travelling circus sideshow strongman. Zampano is a tyrant, who belittles and mistreats her.  They join a circus with a tightrope walker called the Fool.  There is bad blood between Zampano and the Fool.  When one of their conflicts results in police being called to the circus, both are thrown out of the circus.

On the road, Zampano and Gelsomina run across the Fool changing a tire on his car.  Zampano gives the Fool a beating that leaves him dead. Gelsomina becomes increasingly odd and withdrawn, continuously talking about the Fool.  They camp by the side of the road.  While Gelsomina is asleep, Zampano abandons her there.

Five years later, Zampano is travelling with a new circus, and returns to the place he abandoned her.  He hears a peasant girl humming the tune that Gelsomina always played on the trumpet.  He asks where she learned that tune.  She tells him that it is from an abandoned girl her father found on the beach nearby.  The family took her in, but she refused to eat or speak and died soon after.

Zampano gets very drunk that night, and the movie ends with him crying on the
beach 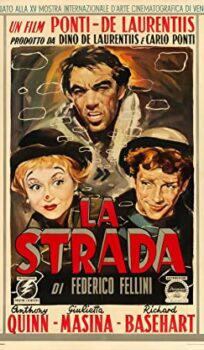