One day, Tramp finds Scamp and tries to convince him to come home, but Scamp ultimately decides to remain with the Junkyard Dogs. The leader Buster then removes Scamp’s collar, seemingly as a form of congratulations. Angel, however, can’t believe that Scamp gave up a loving family and a nice home (things she wanted herself, since she was once a pet) to become something he wasn’t. She quits the gang soon after when Scamp accidentally reveals to the gang that she wanted to be a house dog. She leaves, and a remorseful Scamp goes after her.

Buster then successfully sets up Scamp to be caught by the dogcatcher, as payback for his father leaving the gang, which is why he removed his collar. Scamp looks to spend the rest of his days in the pound, but Angel spots him on his way there, and rushes to his home and tells Tramp about his predicament. Scamp is put in a kennel with Reggie, a mean bullmastiff that he was responsible for having put in the pound earlier on. Tramp and Angel hurry there, and Tramp saves Scamp from Reggie and defeats him. The dogcatcher then appears, but Angel comes to their aid, making him knock himself out. The three depart, and Scamp reconciles with his father.

They then go to the junkyard, where Scamp puts his collar back on and tells Buster he is going home, and buries Buster under a pile of junk before he goes. The other gang members then decide that having a home would be better, so they leave Buster as well.

Scamp goes home to his overjoyed family and owners. Angel goes to leave, but Scamp barks at her so she won’t go. He then introduces her to the family, and Jim Dear and Darling eventually decide to adopt her. 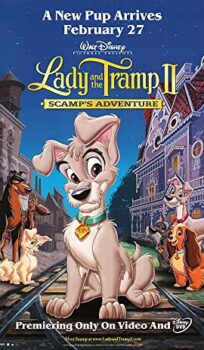