When an episode in public with Tramp lands her at the pound, Lady finds out from the other dogs there that Tramp has had several brief flings before her and was unlikely to ever settle down. Aunt Sarah eventually comes and takes her home, but she chains her to the doghouse outside. Jock and Trusty stop by to console her, and then propose marriage to her so she could come live in one of their homes. She gently declines their offers. Tramp then shows up to apologize for her being caught, but she angrily informs him that she found out about his flings, and ends it with him. Tramp leaves heartbroken.

Moments later, Lady spots an evil-looking rat entering the yard, and it goes into the baby’s room. She barks to alert Aunt Sarah, but she just tells her to be quiet. Tramp hears her barks and returns, and after Lady tells him about the rat, he heads into the house to kill it. Lady eventually breaks her chain and goes in after him. Tramp fights and kills the rat, but in the process he knocks the baby’s crib over. When Aunt Sarah comes in, she believes that Lady and Tramp wanted to hurt the baby, so she locks Tramp in the closet and Lady in the basement, and then calls the dogcatchers to come get Tramp.

Jim Dear and Darling arrive back home as Tramp is being taken away. After they let Lady out of the basement, she shows them the dead rat, and they know now what really happened. Jock and Trusty, having overheard everything, immediately go after the dogcatcher’s wagon to free Tramp. They catch up to it, and Trusty barks at the horses to spook them, which makes the wagon tip over. Lady and Jim Dear then arrive in their car, and Lady and Tramp reunite, but then they notice that the wagon fell on Trusty.

The last scene is at Christmas at Lady’s house, where it is shown that Tramp was adopted by Lady’s owners, and he and Lady now have a litter of puppies. Jock then shows up for a visit, along with Trusty, who had survived with a broken leg. 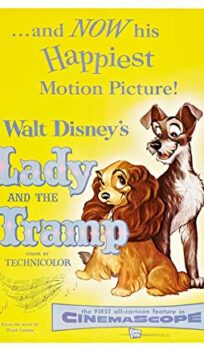