Henry VIII’s young son Edward VI, the first English monarch to be raised a Protestant, becomes terminally ill before he has a chance to marry his cousin, Lady Jane Grey (a very young Helena Bonham Carter).

Jane’s father, Duke of Suffolk, and John Dudley, Duke of Northumberland, in order to “keep the throne Protestant,” hatch a plot to marry Jane to Dudley’s son Guilford, and to convince Edward to pass succession of the throne to his cousin Jane. Jane doesn’t wish to be married and neither does Guilford (Cary Elwes), but the parents overrule. Shortly, the two newlyweds become fond of each other and begin to fall in love (this part contradicts history books, but oh well).

Edward orders the change of succession just before his death, and Jane is shocked to find out she has become queen. Reluctant to rule at first, Jane, with Guilford’s help, seeks to right wrongs and instill progressive change in her nine days’ reign. However, Edward’s sister Mary has used those nine days to martial massive support and declares herself to be queen, with parliamentary approval. Jane is actually relieved and Mary, at first, graciously spares Jane’s and Guilford’s lives despite the evidence of treason.

Mary is engaged to Catholic Prince Phillip of Spain; Northumberland is pleased by this as he revealed to be a closet Catholic.

Unbeknownst to Jane, her father leads a doomed rebellion against Mary to re-install Jane. “Bloody Mary,” advised by Phillip’s emissary to eliminate any potential usurpers, has the young couple beheaded. They remain steadfast in their love and faith to the end. 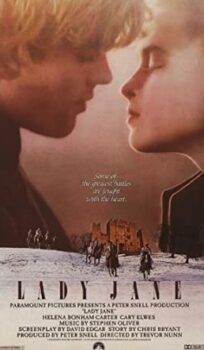