It turns out that Lady Sylvia, snake minion that she is, can be tranced by certain types of music – bagpipes among them.  Lady Sylvia escapes and kidnaps Eve to use her as a human sacrifice to her snake god, after a short dildo-wielding ceremony.  Lord James (Hugh Grant) manages to smoke out the White Worm and Angus frees the sisters and saws through Lady Sylvia’s hand, sending her down in the worm’s belly, shortly followed by a grenade.  Lord James and Angus stop for lunch and then decide drive to the hospital to see their girlfriends, but Angus gets a call from his doctor saying that the anti-venom he injected himself with was in fact arthritis medication.  Knowing that it is too late to dose himself, he looks menacingly at Lord James as they drive away. 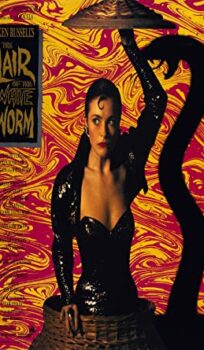