Pooper:
Beach sacrifices himself to kill the female anaconda (and the other heroes shoot and kill the largest crocodile). Tully rescues his daughter and the other surviving sorority girls while Reba arrests Sarah. The film ends with Jim Bickerman having survived the gator’s attack and a baby crocaconda hatching from a hidden nest.

The film begins with poacher Jim Bickerman (Robert Englund) aiding a mercenary named Beach (Stephen Billington) in capturing a giant  Lake Placid crocodile inside a nature preserve. Beach works for a large corporation (from the Anaconda series) experimenting with genetically modified anacondas to develop a blood orchid serum that will grant the taker eternal life. The scientists take the giant crocodile’s blood and inject it into a genetically modified female anaconda. They have two male anacondas to mate with her and believe the offspring’s blood will have the necessary compounds to perfect the serum. The crocodile suddenly awakens and attacks. In the ensuing melee, the anacondas escape and the fence containing the giant crocodiles is breached. The crocodiles and snakes begin heading towards nearby Clear Lake, a populated tourist center.

The crocodiles in particular start wreaking havoc, eating poachers and teens. Lake Placid Sheriff Reba (Yancy Butler) and her deputy, Ferguson (Oliver Walker) are called in to help given Reba’s expertise in fighting the giant crocodiles. US Fish and Wildlife officer Tull (Corin Nemec) is called in to assist. Tull realizes that the animals are heading right towards the lake where his daughter Bethany (Skye Lourie) and her fellow sorority pledges are staying. The sorority is eventually attacked, with most devoured by crocodiles (although one girl is crushed when the now mammoth female anaconda squeezes the car she was hiding in into a ball). Even bitchy, heartless sorority leader Tiffani (Laura Dale) is killed (but not before punching one of the crocodiles in the face).

Tully, Reba and Ferguson try desperately to find Bethany and the other surviving pledges. Meanwhile, the head of the corporation, Sarah Murdoch (Annabel Wright), flies in to try and evacuate the remaining anacondas. Sarah is ruthless in her pursuit, even leaving Jim to be attacked by a crocodile.

The various groups all converge in the woods and encounter the remaining anacondas and several  giant crocodiles. The female anaconda uses her tail to whip one of the crocodiles in half(!), while a second crocodile uses its jaws to throw an anaconda into a helicopter flying above them(!!). The angry female anaconda then coils and crushes the remaining crocodile in revenge. Realizing that Sarah will not allow any of the humans to shoot the female anaconda, Beach allows himself to be swallowed whole by her. While in its throat, Beach pulls the pin out of a grenade and the snake explodes (killing Beach as well). The group then shoots and kills one more attacking giant crocodile.

Reba arrests Sarah for her illegal experiments and hunting the crocodiles in the preserve. Sarah promises to sue for the death of her snakes. Tull reunites with Bethany and her grateful surviving pledges. We then see Jim swim to shore, having survived the attack by one of the crocodiles. The movie ends on a nest in the woods. It appears the female anaconda had laid eggs before dying. One of the eggs hatches to reveal…. a hybrid crocaconda!!!!!! 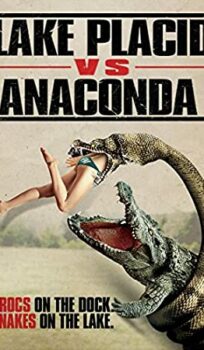