Because of his abusive handling of the domestic disturbance, among other complaints, Abel’s Lieutenant (Eva Larue) puts him on unpaid leave.

At a bar, Abel reveals that his hatred, or rather envy, of Chris’ happy married life with Lisa comes from the fact that his black wife died while supposedly having an affair with her white boss.

As the wildfires get closer to Lakeview Terrace, Chris and Lisa decide to pack up. While packing, Chris discovers the phone of Abels’s informant, who had broken into the house earlier on Abel’s orders. Abel figures it out when Chris calls the last number dialed. Abel comes to the house with a gun in hand, and another on his belt. Chris manages to subdue Abel so that Lisa can drive down to the police, but Abel shoots the car with his other gun, causing Lisa to crash.

Chris runs to the car to help Lisa just as the sheriff’s department arrive. Chris has a gun pointed at Abel while Abel has his hands in the air to seem innocent in front of his sheriff peers. Chris entices Abel with taunts of his wife, causing Abel to shoot at Chris. The Sheriffs retaliate and kill Abel.
In the ambulance, Chris tells Lisa that he will need to get better fast if they are to start a family.

From the SHAW REPORT! 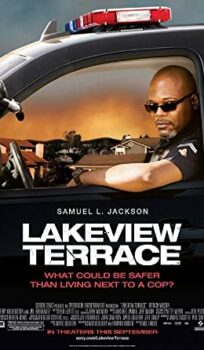