Using knowledge he has gained in the Economics class, Larry Crowne (Tom Hanks) gives his house back to the bank and moves to a small apartment. As he’s getting ready to move out, he finds that one of the UMart managers who’d fired him has been fired himself, and is now a mere pizza delivery boy.

Professor Mercedes Tainot (Julia Roberts) throws her porn-addicted husband out of the house.

Everyone in Tainot’s speech class gives a stellar performance in the last class.

Tainot had resented Larry because she thought he was a smooth operator having an affair with Talia. She learns how wrong she was, and sees Larry in a new light. She accepts an invitation from Larry to come to his apartment for breakfast… and they seem to be on the verge of starting a new relationship together. 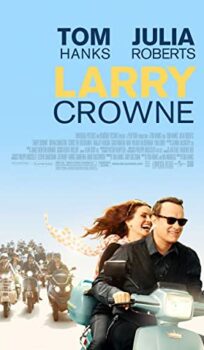