SHORT VERSION:
Despite losing his job with the health inspection office, Larry figures out that Micelli is the poisoner. She poisoned the food of the other fancy restaurants in order to eliminate her competition from the All City Top Chef Contest (except for her only remaining opponent, Big Shug, because she thought he would pose no real threat to her). She recommended Larry to Mayor Gunn to investigate the poisonings because, due to his low intelligence, she believed he wouldn’t investigate it competently and therefore be unable to pin anything on her.

At the contest, Larry exposes Micelli, and he and his partner Amy arrest her. However, he then figures out that his co-worker Jack was the one who poisoned his and Jane’s food when they dined at Micelli’s restaurant one night. He did it to make it seem like Micelli – who is actually his aunt – was innocent, and also because he secretly hated Larry. Jack is also revealed to not be a paraplegic when he tries to make a getaway, but he gets subdued by Larry’s mentally handicapped neighbor Donnie. Jack is placed under arrest as well, in addition to Micelli’s ugly sister Brenda, since she attacked Larry while he was trying to get Micelli.

LONG VERSION:
Larry (Larry the Cable Guy) and Amy (Iris Behr) come to believe that Mayor Gunn (Joe Pantoliano) is the food poisoner, and they accuse him of it during a live TV interview he is doing, but they quickly find out that they are incorrect. Tatlock (Thomas F. Wilson) summons Larry and Amy to his office and tells Larry that he is fired, and as he is leaving the building, he spots a thief making off with his truck. He goes to Big Shug’s (Bruce Bruce) restaurant to vent, but when he admits to Big Shug that at one time he thought he was the poisoner, Shug throws him out. Then, on his way home, he passes by Jane’s (Megyn Price) house and notices her getting friendly with Mayor Gunn, and he believes that she has ditched him for the Mayor.

Jane drops by his house later on, and when Larry tells her that he saw her with the Mayor, she tells him that Amy had called her and told her about what happened to Larry, and she still believed Gunn was involved in the poisonings, so she asked her to go on a date with Gunn to see if he would say or do anything incriminating. All he did was give her a card with his Internet handle on it and told her to expect a hot, personal message from him. After seeing that his Internet handle is “bigballer23”, he remembers how Micelli (Joanna Cassidy) – an owner of one of the five-star restaurants – had received a hot message from bigballer23 while he was checking her computer during his investigation. The next day, he recovers his truck from the city impound, and the staffer there mentions that he saw him at Micelli’s the other night. When Larry asks if he got sick from eating the food there like he and Jane did one night, he replies that he didn’t, and neither did his wife or their friends.

Larry then confronts Mayor Gunn in private and reveals how he knows of his Internet handle, and in exchange for Larry not telling his wife about his philandering, Gunn reveals that Micelli – whom he had been secretly intimate with – was the one who recommended him for the five-star restaurant beat, and she stopped seeing Gunn once he put Larry on the job. After he presents these findings to Amy and Jane, they realize that Micelli is the poisoner, and she did those awful acts in order to eliminate her competition from the All City Top Chef Contest (except for her only remaining opponent, Big Shug, because she thought he would pose no real threat to her). They also realize that she had recommended Larry for the job because, due to his low intelligence, she believed he wouldn’t investigate it competently and therefore be unable to pin anything on her.

At the contest, Micelli loses the first round to Big Shug. After rebuking her staff over it, she puts down her microphone and heads for the bathroom. Larry – dressed incognito so as to not get into any spats with Tatlock, who is present at the contest with Amy and their co-worker Jack (Tony Hale) – grabs the microphone and follows her. He discovers Micelli discussing with her ugly sister Brenda (Brooke Dillman) how they will eliminate Big Shug by poisoning his food, and he picks that up on the mic as well as her talking about her prior poisonings, and everyone in the studio hears every word of it. He then farts, alerting Micelli and Brenda to his presence. Larry fights with Brenda and ends up knocking her out while Amy stops Micelli in the midst of her escape. She attempts to stab Amy with a syringe full of poison, but Amy kicks it skyward, and as they grapple, the syringe comes back down and stabs Micelli in the shoulder, defeating her.

Larry then confronts Tatlock and accuses him of having Jack recommend Micelli’s to him and then having Micelli poison his and Jane’s food, but Amy realizes that Jack is the guilty party in this when she notices him trying to sneak away. Having been exposed, Jack – who is not paraplegic at all and is Micelli’s nephew, and had poisoned Larry’s food to make Micelli seem innocent and also because he hated Larry – jumps out of his wheelchair and dashes for the exit. Fortunately, Larry’s mentally handicapped neighbor Donnie (David Koechner) suddenly shows up and subdues Jack by hitting him in the testicles with his soccer ball. The cops come and arrest Micelli, Brenda, and Jack.

Tatlock grudgingly gives Larry his job back, and Larry recommends a promotion for Amy and also makes Tatlock promise to give him some respect every now and then. Larry and Amy affirm their partnership. Later on, Larry and Jane start taking their relationship to the next level at her house, but then Larry gets a call for another health inspection, and Jane promises to show him a good time when he gets back. During the credits, it is shown that Amy is now dating Big Shug, since they both showed attraction to one another during the film. 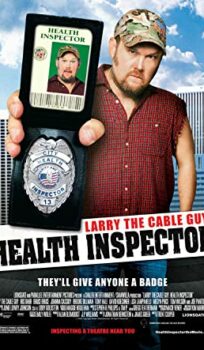