Long Ending:
Officer Jessica Loren (Juliana Harkavy) is a rookie cop showing up for her first day of work. Her assignment is to cover the last shift at the old, now-abandoned, police station (a new, modern station is opening the next day). She meets Sergeant Cohen at the old station where he explains all calls are being routed to the new station. Her job is simply to direct any people that may stop by the old station to the new station and to let some waste collection employees in the building to dispose of biological waste being stored there.

Once Cohen leaves, Loren begins experiencing paranormal activity via a number of jump scares. A homeless man also breaks into the station and Loren is forced to put him in a holding cell. She keeps getting calls from a woman named Monica claiming to be in distress (but the call is cut off before she can track it or get a location). She reports the calls to the new station. We also learn that Officer Loren’s father was a police officer killed in action. Her father was killed when the police stormed a commune where a murderous cult led by the Paymon family was living. He died in the shootout with the Paymon clan.

The new station determines from the info Officer Loren gives them that the Monica who is claiming to call was one of the victims of the Paymon clan. At that point, the supernatural activity ramps up with actual apparitions appearing. It turns out that the leader of the clan and two followers were brought to the old station for interrogation (Loren had been falsely told the Paymons were all killed during the shootout that killed her dad). While in holding, the three committed suicide after performing a reincarnation ceremony . Before killing himself, the leader vowed to “return” and go after the officers’ children. Loren then finds the homeless man dead, hung by the evil spirits of the Paymons.

Officer Loren calls Cohen and leaves him a message to relieve her. She then goes to flee the station but gets a phone call from the alleged spirit of her father. Her father’s spirit convinces her to stay and bring an end to the haunting of the Paymons. She whips out her gun and sees the three Paymon spirits running through the station. She shoots and apparently kills all three of the specters… before being shot herself. Cohen had arrived at the scene to witness her shooting and killing the “Paymons.” It turns out that the people she shot at were actually the waste collection crew (and the Paymon spirits tricked her into thinking they were the Paymons). As Loren lies bleeding, she sees the smiling figures of the Paymon spirits walking towards her and she begins to sing one of their cult songs (suggesting her soul has been corrupted). 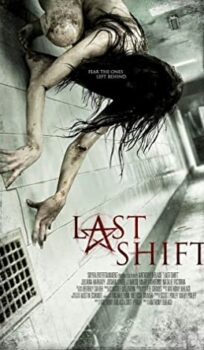