Paul (Marlon Brando), a middle-aged American hotel owner mourning the suicide of his wife, meets a young engaged Parisian woman named Jeanne (Maria Schneider) in an apartment both are interested in. Paul and Jeanne proceed to have an anonymous sexual relationship in the apartment, with Paul being adamant about neither of them sharing any personal information, not even their names. The affair goes on until one day Jeanne comes to the apartment to find that Paul has packed up and left.

Paul later meets Jeanne on the street and says that he wants to start anew with their relationship. He takes Jeanne to a Tango bar and begins telling her about himself. This loss of anonymity disillusions Jeanne about the relationship and she tells Paul she doesn’t want to see him again. Paul, not wanting to let Jeanne go, chases her back to her apartment and he tells her that he loves her and wants to know her name.

However, just then, Jeanne shoots Paul with a gun she had pulled from a drawer and Paul falls dead onto her balcony.

The film ends with Jeanne reassuring herself that Paul tried to rape her and that she did not know who he was. 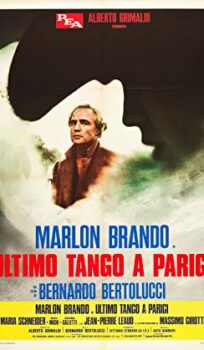