SHORT VERSION:
Trace, Cori, and Peter and his friends eventually go to Virtual Light Industries to stop both Jobe and the completion of the Virtual Light uplink. All but Cori enter the VR world to face Jobe, planning to destroy the virtual Chyron Chip there while Cori simultaneously removes the real chip from its pedestal in the real world. The chip contains a nano-routine that prevents the use of absolute power with it, so destroying the chip will destroy that and flood Jobe with so much power that he will be unable to take it and will be defeated.

Trace fights Jobe one-on-one, and a mere second before the uplink completes, Trace makes him smash the virtual chip while Cori removes the real one. The overwhelming flood of power causes Jobe’s virtual self and his world to be destroyed, and Jobe’s real self is hit with a series of violent electrical shocks that throw him out of his chair. Trace and the others get back to the real world, and he, Cori, and Peter take the chip and find Jobe, who has begun to regress back to his old mentally handicapped self. Walker – who had survived an attempt on his life by Jobe – then appears and takes Peter hostage and demands that Trace and Cori hand over the chip. After Cori does so, Jobe grab Walker’s foot to distract him, allowing Trace to get Peter free. Trace then struggles with Walker until he knocks him down onto an exposed electrical wire and electrocutes him. The heroes then take the fully regressed Jobe outside to watch the sun rise.

LONG VERSION:
Trace (Patrick Bergin) and Peter (Austin O’Brien) manage to sneak into the Virtual Light Institute, steal the Chyron Chip, and evade all of the security measures and make a getaway with Peter’s friends as well as with Cori (Ely Pouget), who had switched over to Trace’s side after having become highly suspicious of both Jobe (Matt Frewer) and Walker (Kevin Conway) and their plans for the Virtual Light uplink. They all head back to Trace’s hideout, but upon analyzing the chip, they discover it to be a fake. Meanwhile, Jobe and Walker use the real chip – as well as its virtual reality version in cyberspace – to begin the 12-hour countdown to the uplink.

Having witnessed the start of the countdown on his computer, Trace deduces that Jobe must have figured out a way around his Egypt nano-routine (which is later revealed to act as a “dam” to prevent the use of absolute power with the chip), and when the uplink is completed, Jobe will gain complete control over every system in the world. Knowing of Jobe’s mental instability and how all of this will result in nothing beneficial business-wise for Walker, Trace and Cori phone up Walker and try to convince him that Jobe is doing this uplink entirely for his own benefit, but Walker refuses to listen, believing that Jobe is loyal to him. Jobe figures out where Trace and the others are and overrides the system of a helicopter near the hideout and sends it crashing right into it, but Trace and the others get out just in time.

Two hours before the uplink completes, Jobe takes over many different services, banks, utilities, etc. across the world and creates widespread chaos, destruction, and financial ruin, and then appears on all TV screens encouraging everyone to join him in his VR world so they can live a better life. Trace and Cori – who are heading towards VLI with Peter and his friends to put a stop to the uplink – realize that Jobe has completed his VR world and is creating all of the mayhem so everyone will have no choice but to join him in his perfect cyberspace world and accept him as their messiah (which fulfills his original goal from the first film). Walker enters Jobe’s lab with his assistant Jennifer (Camille Cooper) and demands an explanation from him, but Jobe tells him that he has no power to give orders anymore. Walker and Jennifer leave and converse over finding a way to kill Jobe, but Jobe overhears this conversation through the security cameras, so he reveals to them that he has heard everything and soon activates the security alarm just as they are joined by the guard Henry (John Benjamin Martin). He then appears on the video screens masquerading as Walker and tells all personnel to evacuate the building, for there are three terrorists in it, and he orders security to shoot these terrorists on sight. Walker, Jennifer, and Henry are found and apparently all shot dead.

The protagonists get into VLI and into one of the labs, and all except Cori plan to sneak into the VR world, find a way into the domed building that serves as the world’s hub, confront Jobe, and then provoke him into smashing the virtual Chyron Chip at the same time Cori removes the real one from its pedestal just before the uplink completes. If they do this, this will destroy the Egypt nano-routine and expose Jobe to so much power that he will not be able to take it and will be defeated. The gang succeeds in making it into the dome and confronting Jobe, and Jobe and Trace engage each other in a swordfight. A mere second before the uplink finishes, Trace manages to make Jobe smash the virtual chip, and Cori pulls out the real chip simultaneously as planned. Jobe then levitates himself into the energy beam coursing through the dome and into the virtual chip’s pedestal and starts torturing Trace with energy, but as Trace predicted, the destruction of the chip and the nano-routine causes Jobe to become absolutely inundated with power, and his virtual self and his world are destroyed. This creates a series of electrical shocks that violently pulse through Jobe’s body in the real world and throw him out of his chair. Trace and the others then return to the real world.

Trace, Cori, and Peter head to Jobe’s room with the chip to check on him, and they discover that he is regressing back to his old mentally handicapped self. Walker then appears, having survived the shooting, and he grabs Peter and holds him at gunpoint and orders Trace and Cori to hand over the chip. After Cori does so, Jobe grabs Walker’s foot in an attempt to help Peter, and this distraction allows Trace to get Peter out of harm’s way. Trace then struggles with Walker until he knocks him down onto an exposed electrical wire and electrocutes him. The heroes then take the fully regressed Jobe outside to watch the sun rise. 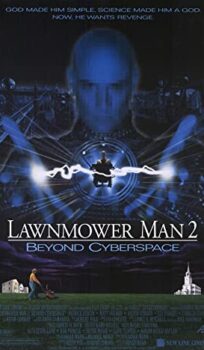