Jonas Nightingale (Steve Martin) is an unscrupulous Faith Healer who finds himself and his troop stuck in a small Kansas town and decides to set-up a “show.”  He finds stiff opposition to this thought from the local Sheriff, Will Braverman (Neeson), who knows Jonas is a fake and does not want him to “preach” in his town.  Nightingale’s assistant, Jane Larson (Winger), is able to get around the Sheriff’s wishes and sets-up a three-day show in the drought ridden, financially depressed, farming town.  Jonas seemingly befriends a local boy, Boyd (Hass), who was crippled by a drunken trucker but actually is using him to seduce his sister Marva (Davidovich).

The first two shows go pretty much as scripted with the local faithful being treated to lots of gospel music, counterfeit miracles and astonishing tricks as they are being separated from their money.  On the third evening the crippled Boyd, on crutches, is front and center at the show looking for his miracle.  Jonas, failing badly, blames his ineptness on the lack of faith of the Sheriff and other nonbelievers in the throng.  Then, unsurprisingly, as the crowd marvels, Boyd drops his crutches and walks unassisted for the first time in many years. Jonas is stunned but must act nonchalant, as the crowd believes that he regularly performs miracles.  He is at first suspicious of the event but ultimately believes that it was miraculous.  He admits to Boyd that he is a fake and had nothing to do with the healing.

Sheriff Braverman and Jane, now a couple, discover that the Jonas has departed the town.  In the final scene, the redeemed Jonas is heading out of town in an 18 wheeler, having gotten a ride from a trucker, as a gentle, crop saving, rain begins to fall. 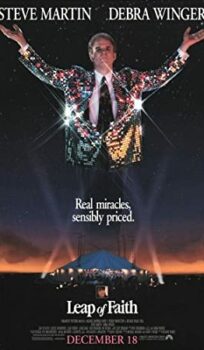