Ron and Reggie Kray (Tom Hardy in a dual role) are twin brothers and gangsters in the 1960’s. Ron is mentally unstable and violent, not caring that his behavior attracts attention. His brother Reggie is more pragmatic, calmer, and wants to use his businesses to give an air of legitimacy and possibly go straight. Their empire grows, but is always fragile due to the unpredictability of Ron’s behavior. Reggie, however, will always protect him, no matter the cost.

Reggie marries Frances (Emily Browning) the sister of his driver, but their marriage is strained by Reggie’s long hours and Ron’s increasingly violent actions, which Reggie continues to defend. One day, a drunken Reggie violently beats and rapes his wife. He comes by the next day to make amends, and proposes a trip to Ibiza, where Frances wanted to go to most. Frances instead chooses suicide by sleeping pills, feeling Reggie will never stop being a gangster and be a proper husband.

Around the same time Ron plays a low level gangster, Jack, to kill Lewis Payne (David Thewlis), the Kray’s business manager that Ron never liked. The attempt fails and Payne cuts a deal with the police on the condition his family is protected. Reggie, realizing the party is over, violently murders Jack in front a full crowd when Jack mentions Frances’ name. When Ron asks why he did it, Reggie says because he wishes he could do the same to Ron, but never would.

The police arrest the Kray’s shortly after. They are charged with murder and spend the rest of their lives in prison. Ron died in 1995, Reggie in 2000. Frances narrates that every day he spent locked up Reggie had a pair of tickets in his pocket; plane tickets to Ibiza. He apparently had planned to take her away on vacation and change his ways after all. 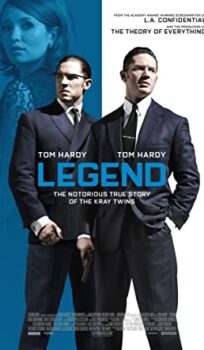