Soren is a young owl who loves to hear his father’s stories of the Guardians, a band of brave owl warriors who fight evil, defend the weak etc…  His brother Kludd scoffs at his idealism.  Kludd is jealous of Soren.  They have not yet learned to fly, and fall out of the nest to the ground.  They are kidnapped by 2 large owls.  They are taken to a militaristic camp, where weaker owls are forced to serve the “Pure Ones”.  The camp is led by Metalbeak, an evil owl who was previously defeated by the Guardians, and his mate Nyra.  Metalbeak has learned that magnetic objects weaken owls.  He is forcing his slaves to gather small magnetic bits of metal, to construct a large magnet.  He has bats as allies, to handle the magnets.  Kludd joins forces with the Pure Ones and chooses to serve them.

Soren and Gylfie escape and seek out the Guardians for help.  The Guardians send a scout party, led by Allomere.  Allomere verifies that the stories are true, and brings back a couple of small owls he rescued.  One of the rescued owls is Soren’s baby sister, Eglantine.  Kludd had brought his little sister as an offering to the Pure Ones.  The Guardians fly off to battle Metalbeak and the Pure Ones.  Soren stays behind.  When Eglantine starts talking, Soren realizes that Allomere was a traitor and the Guardians are flying into a trap.  Soren, Gylfie and a few friends fly off to warn the Guardians.

When Soren’s group arrives, the Guardians are on the ground in the magnetic field.  They are losing strength.  The bats are waiting until they are helpless to attack them.  Soren sees a fire in the forest.  He grabs a lantern and throws it on the magnetic device.  The machine catches fire and falls apart.  With the magnetic field gone, the Guardians recover.  The Guardians defeat the bats and the Pure Ones.  Kludd tries to kill Soren, but Kludd falls into the fire himself.  Soren kills Metalbeak.  Nyra escapes with a few remaining Pure Ones.  Soren is made a Guardian. 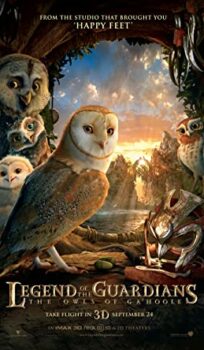