Paul Bonnard arrives in Timbuktu and hires Joe January (John Wayne) as a guide for a mysterious trip into the Sahara.  While in Timbuktu, Bonnard’s gold watch is stolen by Dita (Sophia Loren), a woman of the streets.  Bonnard sends away the police and gives Dita the watch as a gift.  He preaches to her all night long about virtue and redemption.  Dita is so taken by Bonnard, that she follows them into the desert. Joe is upset with the extra person, but they have to take her along.

Once in the desert, Bonnard reveals that he is following a map and a letter from his father to a lost city in the desert with treasure.  Joe is further upset by this, since there is an endless stream of fools coming through Timbuktu with maps to hidden treasure and lost cities, and most die in the desert.  They reach a point that appears hopeless, with just enough water to return to the last oasis.  Joe and Bonnard argue, as Joe insists they must turn back.  Dita pours out all their water, so there is no hope of return.  The only chance is to continue and hope the lost city really is there.

They find the lost city, and 3 dead bodies, including Bonnard’s father.  From the father’s notes and letters, they figure out what happened.  The father fell madly in love with a slave girl in Timbuktu.  He was going to abandon the family for her.  In the lost city, the father became convinced the guide and the girl were plotting to kill him, and run off with the treasure.  He stabbed the guide in the back, the girl shot him, then she died lost and alone in the desert.  Bonnard is greatly upset when he learns of his father’s human failure, specially that the father was going to abandon the family.

Bonnard takes the treasure and the pack animals with all the supplies, and heads back alone in the middle of the night, abandoning Joe and Dita in the lost city.  Joe and Dita head off in pursuit.  They catch up with Bonnard at one of the wells they passed on the way in.  Bonnard has collapsed from dehydration, at the dry well.  Joe knows the desert, and knows that if they dig out the sand, there will still be water.

Bonnard wakes up to see Joe and Dita digging.  Bonnard is convinced that they are digging a grave to bury him and steal the treasure. Bonnard sneaks up and stabs Joe in the back.  Dita shoots Bonnard, and he drops dead, thus re-enacting the scene with his father. However, Joe’s wound is not that bad, and Joe lives.  In the end, John Wayne gets the girl and the gold. 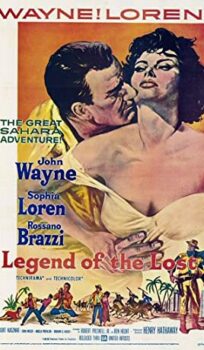