Longer version:
After the attack in which the Weboys mutilated George’s hand, the local Sheriff (Greg Lawson) comes by, visibly being in the Weboys’ pocket, just to compel George and Martha to leave. As they do, George not feeling well forces them to stop at the grounds of Peter Dragswolf, the young Native man they met earlier. While there, Martha tries to convince her to “stick around and live with Peter”, but George gives her a rude awakening that the Weboys will never allow them near their grandson Jimmy without consequences.

That night, George, determined to rescue Lorna and the kid at any cost, drives back to the Weboy house and breaks in. He confronts Lorna’s abusive husband, Donnie (Will Brittain), at gunpoint and convinces Lorna to leave with him. However, as they do so, Elton (Connor Mackay) and Marvin (Adam Stafford) wake up, having noticed a fire -which George had started, as a distraction and part of his plan-. This jolts everyone into action: George knocks Donnie out with the rifle’s butt. Bill scuffles with Lorna, causing her to fall. Elton and Marvin go see about the fire. Blanche tries to shoot George, but, instead shoots Bill in the face, killing him. As George tosses Jimmy over the banister to safety, for Lorna to grab him and run off, Blanche manages to shoot and wound George, but, then, as Elton and Marvin return upstairs, George forces Lorna to shoot and kill both her sons, using her own hand.

Martha, who caught up behind, horse riding with Peter, sees Lorna and Jimmy flee the house and asks Peter to watch over them while she goes in and retrieves the shotgun -which had fallen over, during the brawl-. She finds George, wounded, and, along with Peter, who comes after them, tries to bring him out. Sadly, as they leave, Blanche turns up and mortally shoots George. In retaliation, Martha blasts Blanche away with the shotgun. As she falls dead, she busts a door open, revealing most of the house is already engulfed by the fire.

As George dies in Margaret’s arms, before she runs off, she leans to his ear, whispers something -presumably the same thing he, many years ago, told Margaret’s beloved horse, Strawberry, before having to put her down- and kisses him. Margaret, Lorna, Jimmy, and Peter, all safe, contemplate the burning house as it crumbles, and walk away.

The movie ends as, the next morning, a mournful Margaret embraces Peter, thanking him for his help, and drives off with Lorna and Jimmy, back to Montana. 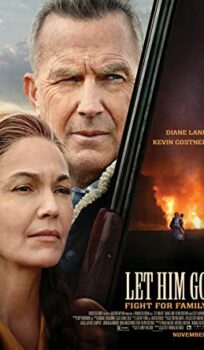