Just like the Swedish version, Abby (Chloë Moretz) is a vampire who comes to like Owen (Kodi Smit-McPhee), and vice-versa.

He is often picked on by several bullies throughout the movie, which makes his new friend all the more special.

Abby’s “father” (Richard Jenkins) is actually a boy who also fell in love with Abby years ago, and is now an aged handler of sorts, murdering people wherever they go to harvest blood for Abby. He is the injured man in the beginning of the movie, and when the movie catches up to the flash forward, we see that he allowed Abby to kill him for his blood.

After Owen interrupts the investigating officer, whom Abby murders, Owen leaves frightened. He is attacked by the bullies a final time at the pool at school, but is saved by Abby after she eviscerates them.

The last shot of the movie is Owen on a train with a large chest housing Abby, who communicates with Owen using the Morse code they practiced throughout the film. We are to assume he has become her new handler. 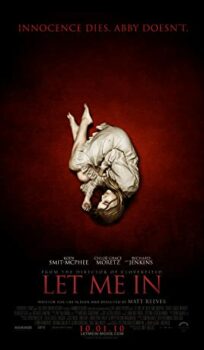