Riggs (Mel Gibson) and Murtaugh (Danny Glover) find out that when Benny talked about buying back the “Four Fathers” he was referring to four former triad heads from Hong Kong, one of whom is Ku’s brother.

Riggs and Murtaugh lead police to where the trade will be made, and Riggs reveals to the Chinese general that the money is counterfeit. A shootout ensues, where Detective Butters (Chris Rock) takes a bullet for Murtaugh, who acknowledges him as his son-in-law. Murtaugh takes a shot at Ku, who dodges the bullet that hits his brother, killing him. Ku fights Riggs and Murtaugh, hurting them each badly, and knocking Murtaugh temporarily unconscious. Riggs manages to get Ku underwater, where he finds a machine gun in one of the sunken triad SUVs, and pumps Ku full of lead. Murtaugh dives in to save Riggs.

In the next scene, Leo (Joe Pesci) ensures Riggs that marrying Lorna (Rene Russo) would be the right thing to do, and he can still have a special place in his heart for his first wife Vicki. At the hospital, Leo gets a rabbi (Richard Libertini, clearly not a Jewish actor) to perform a mock ceremony to make Lorna feel better as she goes into labor. Captain Murphy arrives at the hospital to greet the families, tells Murtaugh that the mayor granted asylum to Hong’s family, and demotes the two back to Sergeants.

A doctor takes a final family photo of everyone together, including Captain Murphy and Leo. 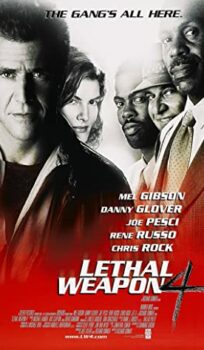