SHORT VERSION:
It turns out that Amanda was killed over something her father, Hunsaker, was involved in. Hunsaker was a member of the Shadow Company, a group of deadly mercenaries formed during the Vietnam War, and under the current leadership of General McAllister and his chief enforcer Joshua, they smuggle two large shipments of heroin into the U.S. from Asia every year. Hunsaker’s role was to launder the money through the bank he owns, but he had grown tired of being involved with them and wanted to expose them, which prompted him to contact Murtaugh. When McAllister found out about this, he decided to retaliate by paying Dixie – a prostitute like Amanda – to give Amanda barbiturates laced with drain cleaner in order to fatally poison her (though Amanda ended up jumping to her death after ingesting them). Joshua eventually kills Hunsaker one day for telling Murtaugh all about the Shadow Company’s agenda, as well as Dixie for knowing enough to possibly put the cops on his group’s trail.

A showdown is forced between Murtaugh and Riggs and the Shadow Company after the villains kidnaps Murtaugh’s daughter Rianne to find out how much the two cops know about their next shipment. In the end, Rianne is saved, the Shadow Company is wiped out, Murtaugh kills McAllister, and Riggs winds up fighting Joshua right in Murtaugh’s own front yard while Murtaugh and their fellow cops watch, and he eventually comes out the winner. Then, while Joshua is being cuffed, he takes a cop’s gun and aims it at Murtaugh and Riggs, but they see it coming and shoot him dead.

Riggs abandons his desire to commit suicide and has Christmas dinner with Murtaugh and his family.

LONG VERSION:
When Murtaugh (Danny Glover) and Riggs (Mel Gibson) go to the home of the prostitute Dixie (Lycia Naff) to question her about Amanda’s (Jackie Swanson) death, believing she had something to do with it since she says she saw it happen and was working away from her normal streets, her house suddenly explodes just as they approach it. After cops, firefighters, and paramedics report to the scene and remove Dixie’s burnt body from the ruins, Riggs finds a part of the explosive device that was used and tells Murtaugh that this type of device was one used by C.I.A.-hired mercenaries during the Vietnam War. When they question a kid who saw a man plant the device, the kid points out that a tattoo Riggs has is identical to the one he saw on the man, and Riggs informs Murtaugh that his tattoo is a Special Forces one. They then begin to suspect that Amanda was killed over something her father, Hunsaker (Tom Atkins), was into, so they head over to Hunsaker’s estate.

Murtaugh confronts him with his and Riggs’ suspicions while Riggs waits outside, and Hunsaker soon confesses that he is neck-deep in a situation that dates all the way back to the Vietnam War. Through his own words and Murtaugh filling in the blanks, we find out that Hunsaker worked with a C.I.A.-linked group called “Air America” that secretly ran the entire war out of Laos, and he was part of a special unit of deadly mercenaries called the Shadow Company. A couple of years ago, the Shadow Company reunited under the command of General McAllister (Mitchell Ryan) and his top enforcer, Joshua (Gary Busey), and using their list of sources in Asia, they have been smuggling large amounts of heroin from there into the U.S. twice a year, with Hunsaker laundering the money through his bank. However, Hunsaker had desired to get out of the whole operation and expose it, hence why he earlier contacted Murtaugh, and when McAllister found out about it, he had Amanda killed in retaliation through paying Dixie to give her barbiturates spiked with drain cleaner (and Dixie was killed so she wouldn’t be able to give any information to the police that might put them on the Shadow Company’s trail). Murtaugh tells him that he is going to fix this problem and demands to know when the next heroin shipment is coming in, but Hunsaker tells him that it is foolish to oppose the Shadow Company because they are expert-level killers, plus he is in this too deep and is worried about the safety of his other daughter. Suddenly, a helicopter carrying Joshua appears, and he shoots and kills Hunsaker before flying away, though Riggs sees him before he departs. He radios to McAllister that Hunsaker has been taken out, but he has already spoken to the police, so McAllister tells him that they are going to have to turn up the heat against them.

A night or two later, Joshua tracks down Riggs while he is out questioning a prostitute about Dixie and shoots him in a drive-by, but unbeknownst to Joshua, Riggs survived thanks to a bulletproof vest he was wearing. Murtaugh, who was also at the scene, tends to Riggs, but then Riggs tells him that the guy who just shot him was Hunsaker’s murderer, and since the Shadow Company will now think he is dead, this will give them both an edge. Unfortunately, they receive a call on their radio about a body found two blocks from Murtaugh’s house that matches the description of the boyfriend of Murtaugh’s daughter Rianne (Traci Wolfe), and Murtaugh immediately fears for his family’s safety. When they get to his home, they discover through a note left at the door that McAllister had his men kidnap Rianne. Joshua then calls Murtaugh to confirm this act against him, and tells him to stay by the phone to find out where to meet him and his associates before hanging up. Joshua then calls the Homicide Division and gets a confirmation on Riggs’ death, and after relaying this news to McAllister, he tells Joshua that they need to take Murtaugh alive. Meanwhile, Riggs stresses to Murtaugh that they are going to have to make this a bloody affair if Rianne is to be brought home in one piece. One of McAllister’s cronies then calls and tells Murtaugh to meet the Shadow Company at the dry lake in Victorville tomorrow at sunrise, wanting to know what Hunsaker had told him.

While on their way to the meeting place, Murtaugh drops Riggs off in another location, and Riggs runs off with a sniper rifle in hand and situates himself a distance from the meeting place with some shrubs as cover, the both of them planning to rescue Rianne by force. However, the plan fails, and Murtaugh and Riggs are both captured. They are taken to a warehouse and are both tortured separately to determine how much they know about the incoming heroin shipment, but Riggs is able to overpower and kill his torturer, get himself free, then barge into the room Murtaugh is being held in just as McAllister and some others are threatening to harm Rianne. He kills everyone except McAllister, who escapes, and he then frees Murtaugh and Rianne. They find their way into a nightclub that serves as a front for the Shadow Company’s business, and after Murtaugh and Riggs shoot their way through more of McAllister’s henchmen, they spot Joshua and chase him outside, but he steals a car and drives off. After leaving Rianne in the care of a policeman who was drawn to the scene by the gunshots, Murtaugh and Riggs pursue Joshua, but soon after, the weakened Murtaugh tells Riggs that Joshua is heading for the freeway and encourages him to keep going after him, then tells himself that he must confront and kill McAllister.

Riggs manages to shoot out the engine on Joshua’s car and cause it to catch fire, and Joshua crashes. He and Riggs then have a gunfight in the middle of the freeway until Joshua jacks another car and speeds off. Murtaugh confronts McAllister back at the warehouse just as he is getting away in his own car, and he shoots and kills McAllister’s driver. McAllister takes the wheel and steers the car out onto Hollywood Boulevard, but he collides with a bus and his car flips over onto its roof. Now trapped, he helplessly watches as some flames ignited by the crash reach and blow up some grenades he had been keeping in the car, killing him. Riggs then comes up to Murtaugh, and after telling him that Joshua got away, Murtaugh realizes that he must return home since Joshua knows where he lives and will likely take out his wife and his other two children. They commandeer a detective’s car and immediately go there while another cop calls for units to converge on Murtaugh’s house.

Joshua kills the two officers keeping watch over Murtaugh’s residence and shoots his way inside, but discovers that Riggs had already sent Murtaugh’s family away, having expected this. Murtaugh and Riggs then send the dead cops’ patrol car plowing through the living room window, and the distraction enables Riggs to confront Joshua at gunpoint and force him to come outside. After Murtaugh checks Joshua for any additional hidden weapons, Riggs challenges him to a fight, and as they slug it out, dozens of cops make their arrival. Riggs eventually wins when he subdues Joshua with a triangle choke, but he decides to spare his life. As two cops come in to cuff Joshua, he snatches one of their guns and aims it at Riggs and Murtaugh, but they see it coming and they both shoot him dead.

The next day, Riggs visits the grave of his deceased wife, then goes over to Murtaugh’s house. Rianne answers the door, and he hands her the hollow-point bullet he had been thinking of committing suicide with and tells her to give it to her father, saying that he doesn’t need it anymore. As he is returning to his truck, Murtaugh comes out and invites him in to have Christmas dinner with his family, and Riggs takes him up on the offer, but says that he brought his dog Sam along. After the dog gets inside, it sees Murtaugh’s cat Burbank and begins chasing it around and breaking things. 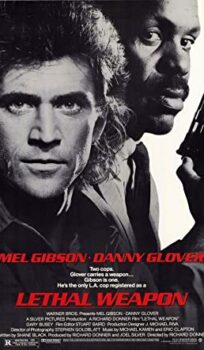