Short pooper:
Vadim (Roman Madyanov) gets away with -and rejoices about- expropriating Kolya’s (Alexei Serebryakov) property and building that lavish new Church he wanted to, on the grounds. Kolya gets arrested and sent to prison, accused of murdering Lilya (Elena Lyadova). Roma (Sergey Pokhodaev) agrees to go live with acquaintances -who only care about the stipend they will get in return for him-, to avoid becoming a Ward of the State. In the end, Bishop Arkhierey (Valeriy Grishko) -who was in Vadim’s pocket all along- is seeing giving, from the new Church, an extremely hypocritical sermon about “the virtue of truth and its defense, and acting under the guide of Christ”, clearly at odds with the lengths, they all agreed in going to, to destroy the life of an innocent man.

Longer version:
When it seemed the efforts of Kolya’s lawyer friend, Dima (Vladimir Vdovichenkov), who agreed to help fight Vadim’s unscrupulous efforts to illegally obtain Kolya’s land, were getting somewhere, suddenly things take a turn for the sour for Kolya, with eventually devastating consequences.

Dima and Lilya begin an affair -it is not fully clarified whether it starts upon the arrival of Dima to the locality or it just continued from before-; Kolya finds out after, while at a cookout event, some child claims “having seen Dima choking Lilya.” They fight over this but reconcile. Meanwhile, Vadim, despite the setback bestowed on him by Dima, having had to forcefully command the release of Kolya, consults with Arkhierey, the local Orthodox priest, who just tells him “to stop nagging and do what he must.” Then, Vadim has his thugs attack Dima when the extortion deal was supposed to be finalized and, under a death threat -completed with a fake execution attempt-, forces him to drop the whole matter and return to Moscow, which Dima powerlessly does; at the same time, these same thugs coerce Kolya and Lilya to fast-track the process of clearing the property.

While they prepare to vacate, Kolya and Lilya initiate forceful sex; his son Roma spots them and runs off, having a meltdown and “wishing for Lilya to be gone”. That night, sleepless and overcome with guilt, Lilya gets up, walks off the house, and is last seen by the nearby cliff; her body turns up a few days later, by the shore -whether she committed suicide or it happened by the own hands of Vadim or someone else secretly hired by him, is left to speculation-. Kolya grows desperate and despondent over her original disappearance and, after, over the news of her turning up dead, turns to heavy drinking and lamenting; Bishop Arkhierey tells him “he should accept his fate, like Job did, so everything works out for him”.

Far from improving, things further worsen up for Kolya; he is arrested under the suspicion of having murdered Lilya. The entire community, who only pretended to be friends with him so they could use him for his skills as a mechanic, turns on him and testifies about the threats he made to Lilya and Dima; furthermore, the evidence seems to corroborate the accusations. Thus, Kolya, seen by everyone as a drunk, problematic, and now also murderous character, is sentenced to 15 years in prison, his family now disgraced and destroyed.

Roma, with no one to care for him and not wanting to be sent to an orphanage, reluctantly agrees to go live with a family acquainted with Kolya and Lilya, although it is more than evident that they just accepted in exchange for a monthly payment they’d get from the State. Vadim celebrates the news of the verdict and gloats that “now Kolya will learn to stay in his place”. The house is eventually razed to the ground, and sometime later, a new, beautiful new Orthodox church is built in its place.

The final sequence of the film shows a religious service by Arkherey, where he calls the Congregation to “defend God’s truth versus the world’s truth, because it is the real, liberating one”; he also points out “how good intentions do not excuse evil acts, and everyone should always put their trust in Christ in everything they say or do”. In the end, the local leaders, Vadim included, are seen driving away in luxurious vehicles. This goes to prove how hypocritical everyone was and how using and crushing others to attain a selfish personal goal while pretending to be a righteous, God-fearing being didn’t seem to be an issue for many. 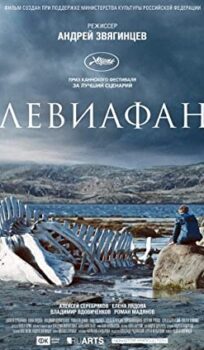