Les (Corey Haim), Dean (Corey Feldman) & Charles (Michael Manasseri) have a crazy night with the Cadillac, and come morning, it is in shambles. After dropping Dean & Charles off, Les takes a groggy Mercedes (Heather Graham) back to her place. While dropping her off, she mentions how – despite being asleep for the majority of the evening – she felt safe with him the whole night, and she kisses him.

Les returns home to find that his mother (Carol Kane) has gone into labor. After being lambasted by his father (Richard Masur) for wrecking the Cadillac, his mom is loaded into it, and Les ends up having to be the one to drive them to the hospital since his mother doesn’t want his father to leave her side. When they stop at a stoplight, the car’s stick shift gets damaged, making the car capable of only going in reverse. Despite this, Les drives the car in reverse – rather effectively – to the hospital. Once he and his father get his mother inside and he gets commended by his father for his driving, a construction crew accidentally drops a steel beam on the car, wrecking it beyond repair.

Some time later, after Les’ mother has given birth to twins, Les’ grandpa (Parley Baer) stops by and asks about his Cadillac. The family shows him the destroyed car, and he starts laughing, telling Les’ father that he wrecked his BMW, and a tow truck emerges with the totaled BMW. Les’ father gives the BMW to Les, saying he’d get him one if he got his license, but Les declares that he doesn’t need a BMW now – he already has a Mercedes. Mercedes pulls up in her car, and he leaves with her on a date. 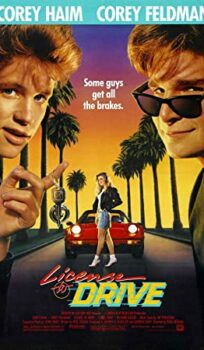