In 1970’s California, 15-year-old actor Gary Valentine (Cooper Hoffman) falls for 25-year-old photographer’s assistant Alana Kane (Alana Haim). Although she doesn’t reciprocate his feelings, she forms a friendship with him as they go through several misadventures, such as going into the waterbed business and dealing with people like egotistical actor Jack Holden (Sean Penn) and insane producer Jon Peters (Bradley Cooper).

After the waterbed business goes under due to a gas crisis, Gary moves on to opening a pinball arcade while Alana works as a volunteer for the campaign of mayoral candidate Councilman Joel Wachs. Gary and Alana have an argument that leads to them parting ways, but by now, Alana has begun to acknowledge her feelings for Gary. After having drinks with Wachs, Alana learns he is gay and wants her to be the beard for his partner.

Gary and Alana eventually realize they miss each other and find their way back to each other, and they share a kiss. 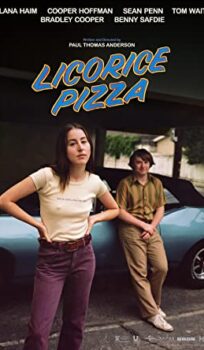