The three stories had two common threads: sex, and the fear of not facing our reality (this second one was which caused people to faint and tumble to the ground). They would also come crashing together at December 4, at 4:44 p.m. -a date and time recurrently depicted throughout the film- at Revolution Square.

Elpidio doesn’t go away with Chrissy the tourist, but instead interpretates what seem to be signals he had been long expecting from his mother Cuba, and runs off to Revolution Square.

Julia, the lady with the psychosomatic fainting and yawning problem (it is to be noted that, towards the end, she no longer fainted upon hearing or saying the word SEX, as she overcame that fear) catches a taxi to go to the Square, but halfway her taxi crashes and she must continue running on foot.

Mariana, the young ballerina (and who also happened to be the daughter Julia abandoned at the same orphanage Cuba ran), gives up her ballet part as Gisselle and also struggles with taxis to get to the Square.

The three of them meet at the Square, and Elpidio starts whistling when he sees and recognizes Mariana as the “Bebe” from earlier in the film.

The film ends with the young female Narrator “self-proclaimed as God, declaring happiness to all Cubans by the year 2020”, and stating that it only takes to whistle to be happy in life. 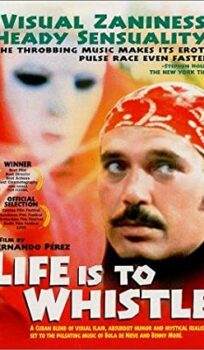