The ship that is carrying Pi’s family sinks in a storm. Pi is stranded on a lifeboat with only a zebra, an orangutan, a hyena, and a fierce tiger named Richard Parker. The hyena kills both the zebra and the good natured orangutan and is about to attack Pi when Richard Parker kills the hyena. Pi is then left with only Richard Parker in the lifeboat. Pi is afraid of Richard Parker and they spend endless days at sea before Pi and Richard Parker bond.

Pi eventually washes ashore in Mexico. Richard Parker jumps out of the lifeboat, and disappears into the jungle without a backward glance. Pi is still devastated by the lack of closure he had with both his family and Richard Parker. He tells the author who wants to write the book that the insurance agents refused to believe his story about the tiger.

There is then a flashback to Pi in the hospital room, with the insurance reporters. He recounts a very different story to them, in which there were four survivors in the shipwreck — Pi, Pi’s mother, the cook, and a boy. The cook was sadistic and eventually ate the boy out of hunger. The cook killed Pi’s mother, and Pi then killed the cook. We see that Pi’s eyes fill with tears when retelling this story.

The older, now married Pi then asks the writer which story he believes. The writer says he will write about the tiger story, but points out the similarities between the “real” story and the “tiger” story. He says that the zebra was the boy, the hyena was the cook, the orangutan was Pi’s mother, and Pi was Richard Parker. Pi is reflective but evasive about which story is “true.” It is left up to the viewer to decide which story of Pi’s to believe. 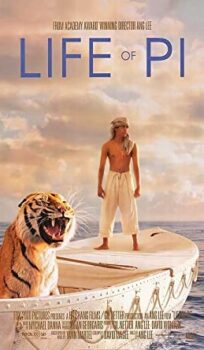