Deanna Miles (Melissa McCarthy) finds out her husband Dan (Matt Walsh) is leaving her for another woman. Since he encouraged her to drop out of college before graduating when she got pregnant, Deanna decides to complete her final year at the same school as her daughter Maddie (Molly Gordon).

Deanna befriends Maddie’s classmates and even hooks up with a younger guy named Jack (Luke Benward), who happens to be the son of Dan’s new fiancee Marcie (Deanna rubs this in her face). However, after Deanna and her friends trash Dan and Marcie’s wedding, she gets cut off financially and therefore has no money to complete the year.

The girls throw a party to raise money so Deanna can complete the year by saying Christina Aguilera will be in attendance. When it looks like their lie is exposed, Deanna’s creepy roommate Leonor surprises them by bringing Christina since they are cousins and Christina supports Deanna’s cause.

Deanna completes the year and graduates with Maddie. 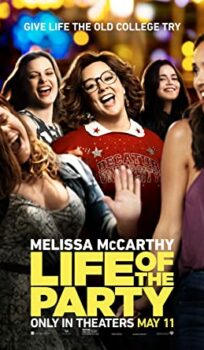