A beautiful family movie that established the stereotype of the absent-minded autocratic father, and the mother who really runs the show.

Father (William Powell) tries to run his house like his company, with efficiency and order. He is unhappy that Cousin Cora and her friend Mary (Elizabeth Taylor) are staying to visit. Oldest son Clarence Jr and Mary fall in love. At dinner one evening, Mary’s persistent questioning leads to the discovery that Father was never baptized. This upsets Mother greatly, and she wants him baptized fast. He refuses, saying it is unseemly for a grown man to be baptized like a baby. The main plot revolves around mother’s attempts to convince him.

Clarence Jr’s suit is ripped. He is given an old suit of father’s that fits him. However, whenever Clarence Jr wears father’s suit, he acts just like father, which upsets Mary. Meanwhile, 2nd son Harlan has numerous money making schemes. One of them is selling a patent medicine. He slips some in mother’s tea, which makes her very sick. When father thinks he is losing mother, he promises her he will get baptized. Once she gets well, he reneges on his promise.

In the end, Clarence Jr and Mary make up, father gets baptized, and they have to buy back all the medicine bottles that Harlan sold. 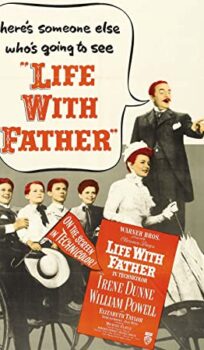