Tobe’ Hooper directed this opus which begins as a science-fiction movie, then becomes a detective story and ends as a vampire/zombie apocalyptic holocaust. The convoluted plot concerns a British /American Space Shuttle mission (you know you’re in trouble already) to Halley’s Comet. The Shuttle Churchill finds an alien ship inside the comet’s coma that contains two nude men and one nude woman, each encased in a transparent box and the dried husks of dozens of bat-winged creatures. Col. Tom Carlsen (Steve Railsback, who went from playing Charles Manson in ‘Helter Skelter’ to this) is the only survivor of the mission and returns to Earth in a one-man rescue capsule. The Churchill returns to Earth orbit and is boarded by another shuttle’s crew who find the interior gutted by fire, the rest of the crew dead and the three encased aliens undamaged. The three alien bodies are brought to Earth and what follows is nearly incomprehensible. The woman (called ‘Space Girl’ in the credits and played by Mathilda May, who apparently had no inhibitions about nudity) and the two men are space vampires who come to life and begin draining the ‘life force’ from people. The drained humans must feed within two hours or their bodies dry up and explode. As Carlsen and Caine (Peter Firth) travel around London looking for Space Girl, Dr. Hans Fallada (Frank Finlay) realizes that these creatures are the vampires of legend and announces that they can only be killed by thrusting a metal shaft into the energy center 2” below the heart (no explanation is given as to how he figures this out). Fallada uses this technique to destroy one of the male vampires that is disguised as a guard by running him through with a sword. Quickly, all of London is being overrun as victims must feed on other victims and the process multiplies geometrically. The life forces are sent through the remaining male vampire to Space Girl who is laid out in a white gown on the crypt in the Cathedral of London. Space Girl, in turn, is beaming the energy to the alien ship that has left Halley’s comet and now is in geosynchronous orbit around London, has deployed an umbrella-like structure and is collecting the life forces (Why? Who knows? It’s that kind of movie.) While Carlsen heads for the Cathedral, Caine kills Fallada after Fallada is possessed and takes the sword. Carlsen, who, it turns out, drained the Churchill crew and set in on fire because he was in love with ‘Space Girl’ (surprise!), finds her in the cathedral. While NATO is planning to nuke London (!), Caine battles his way through the riots in the streets and through the ubiquitous vampire/zombies to the cathedral. Caine stabs the second male vampire with the sword (who changes into a bat-wing creature like those on the ship, before exploding) and finds Carlsen and Space Girl making love while standing naked on the crypt. Caine throws the sword to Carlsen, who catches it with one hand and impales both him and Space Girl, killing them both. This stops the madness, sends the ship back towards Halley’s comet and mercifully ends this muddled, expensive, schizophrenic mess of a movie. Look for Patrick Stewart (this was before ‘Star Trek: The Next Generation, so he must have needed the money) as Dr. Armstrong, the head of an insane asylum. Space Girl hides inside of Dr. Armstrong for a while and eventually kills him. Tobe’ Hooper never directed another big-budget film again after this mess bombed in theatres. 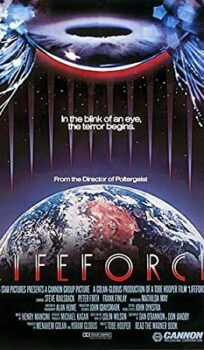