Jacob (Anton Yelchin) and Anna (Felicity Jones) meet in college and begin a passionate relationship.  However, Anna is due to return to England after the completion of school.  On a whim, she decides to stay in America with Jacob for the summer before heading back.  However, this results is a violation of her student visa and when she tries to return to the States, she is denied entry and deported.

Jacob and Anna attempt to maintain a long distance relationship, though they both find it extremely difficult and they begin to go their separate ways and see other people – Jacob starts seeing Sam (Jennifer Lawrence) and Anna sees Simon (Charlie Bewley).  One day, Anna realizes that she can’t be with anyone but Jacob and they decide to marry each other, which would presumably allow Anna to return to the States.  However, they both later find out that this is not the case.  In addition, trouble brews between the couple when Anna finds out Jacob is still in contact with Sam and they separate again, with both returning to relationships with Sam and Simon respectively.

One day, soon after receiving a promotion with her job at a magazine, Anna gets the news that her immigration issues were finally resolved.  Later, at dinner with Anna’s parents, Simon proposes to her.  However, she ends up giving up both her promotion and the proposal to finally go and live with Jacob in America, who in turn breaks up with Sam.  The cost of this move is immediately apparent as Anna, despite her great career in England, has trouble finding a job in America.  The film ends with the two taking a shower together and flashing back to the early days of their relationship.  It’s left ambiguous how they end up, but the somewhat disappointed look on their faces says it all. 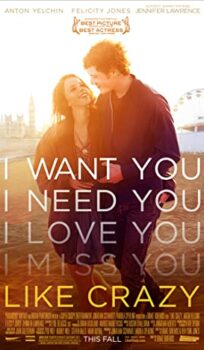