Calvero (Charlie Chaplin) comes home drunk and smells gas in the hallway of this building. He breaks down a door, and finds Terry (Claire Bloom) unconscious. She had turned on the gas in a suicide attempt. He summons a doctor. They need to get her away from the gas, and the only place they can lay her down is Calvero’s apartment. By the time she is well enough to be moved, the mean landlady has rented her room to someone else. She has no money and nowhere else to go, so Calvero lets her stay.

Calvero was formerly a world famous comedian, but has fallen on hard times. Terry was a ballet dancer. Calvero’s wit, joy and enthusiasm fill Terry with a new love of life. While she is falling in love with him, he sees her more like a daughter.

While Calvero is nursing Terry back to health, he has dreams where he is performing new routines. Calvero’s agent gets him a booking for a week, but his first night is a flop, and most of the audience walks out. He is fired. However, Terry starts dancing again, and is doing very well. She is giving star billing in a ballet composed by Neville (Sydney Chaplin). Neville loves Terry, but Terry says she loves Calvero. Calvero tries to convince Terry he is too old for her, and she should go with Neville. (While the character’s ages are not stated, at the time the movie was release, Chaplin was 63 years old, and Bloom was 21.) Calvero finally disappears. Months later, by chance Neville runs into him. Neville reveals that Terry is still searching for Calvero. Calvero asks Neville not to tell Terry where he is, because he wants her to go on with her life, and not waste it on an old man. Neville does tell Terry, and she comes for Calvero. Terry and old friends arrange a special tribute to Calvero at the theater. Calvero goes on first, and performs the routines he dreamed when caring for Terry at the beginning. He is a huge hit, with the crowd clamoring for more.

Backstage Calvero is having chest pain. Terry is concerned, but Calvero sends her onstage, as she is the next performer on the schedule. While watching Terry dance, Calvero dies of a heart attack. 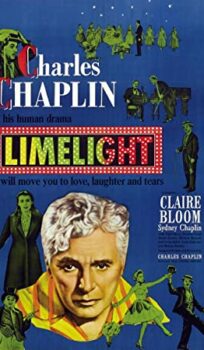