The Giants end up defeating the Cowboys, and amidst the celebration, Danny arranges a date with his childhood crush Patty.

As the spectators are leaving the field, Danny comes up to Kevin and tells him that the Giants want to know if the Cowboys want to join up with them, and he also asks him if they could both be head coaches of the merged team. Kevin tells him he’ll take both of his suggestions under consideration, and then asks if he intends to hold him to the bet they made. Danny decides to forgive it on the condition that the message on the town’s water tower be changed from “Home of Kevin O’Shea” to “Home of the O’Shea Brothers”, reflecting a childhood promise that Kevin made to him where he said that both of their names would be on the water tower

LONG VERSION:
After the Little Giants have a rough practice session the day before the big game with the Pee Wee Cowboys, Tad (Danny Pritchett) has a chance encounter with John Madden (himself) and some NFL players while biking home. He convinces them to come visit Danny (Rick Moranis) and his teammates, and they all give the kids some helpful advice. Before departing, Madden tells the team that, if they stick together, they will be fine.

Later on, Becky (Shawna Waldron) and Junior (Devon Sawa) have a chat, and Junior acknowledges her as more like a teammate than as a girl. This leads her to believe that what her uncle Kevin (Ed O’Neill) told her was right, in that boys like Junior are more interested in girls than teammates. She therefore heads to Kevin’s house to get a cheerleader outfit from her aunt Karen (Mary Ellen Trainor), thinking that she will gain Junior’s attention if she was a cheerleader. When she returns home, she tells Danny that she won’t be playing tomorrow, and eventually criticizes him for not treating her more like a girl and then throws down the box containing her outfit on the floor. Danny sees the outfit, but decides to not argue the matter with her and let her do what she wants.

The next day, Becky stops by the Giants’ locker room in her cheerleader uniform to wish the team good luck, and upon seeing that she isn’t going to be playing, their morale instantly dips. As Danny and Kevin go to the center of the field for the opening coin toss, they get into another one of their sibling arguments, but this time around, Danny makes a impulsive bet: If the Giants win, Danny will become owner of Kevin’s car dealership, but if the Cowboys win, then Kevin will become owner of Danny’s gas station.

Come halftime, the Cowboys lead 21-0. As the Giants are moping around in the locker room ready to throw in the towel, Danny tells them about how, while he is never usually able to beat Kevin at anything, he did beat him one time when they were kids, in a bicycle race down Cherry Hill. This makes each of the players remember “one time” where they had achieved something that they normally wouldn’t have achieved, and Danny tells them that, even if the Cowboys beat them 99 times out of 100, that still leaves “one time” to beat them. Motivated, the boys head back out onto the field.

The Giants make a big comeback and start scoring through a series of outstanding and unorthodox plays. Noticing that Junior is the biggest threat, Mike (Brian Haley) tells his son Spike (Sam Horrigan) to take him out, so Spike proceeds to injure Junior by spearing him after the referee’s whistle. The unsportsmanlike act earns Kevin’s disapproval, but more than that, it enrages Becky, prompting her to discard her pom-poms and put on her football gear and enter the game.

The Giants score some more touchdowns (and in the process, a few of the players overcome their personal problems and Becky gets Spike back on Junior’s behalf) until the score is tied at 21 with four seconds left to go. Nubie (Matthew McCurley) suggests that they execute the play he’s been working on called “The Annexation Of Puerto Rico.” As they perform it, Kevin realizes that what the Giants are executing is actually the Fumblerooski. The sickly Jake (Todd Bosley) ends up scoring the touchdown and wins the game for the Little Giants. Amidst the celebrations, Danny gets an embrace from his childhood crush Patty (Susanna Thompson), and after he asks her out to dinner, she kisses him. Also, Spike leads the Cowboys in a begrudging round of applause.

As the spectators leave the field, Danny talks to Kevin, and he tells him that the Little Giants want to know if the Cowboys would like to join up with them, and he suggests that they both become the head coaches of the merged team. Kevin tells him he’ll take his suggestions under consideration, and then asks Danny if he intends to hold him to the bet they made. Danny decides to forgive it on the condition that the message on the town’s water tower be changed from “Home of Kevin O’Shea” to “Home of the O’Shea Brothers,” reflecting a childhood promise that Kevin made to him where he said that both of their names would be on the water tower. 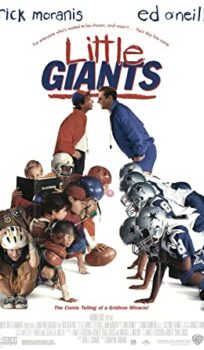