SHORT VERSION:
Melody hands over King Triton’s trident to Morgana despite some last-minute protests from Ariel, and Morgana then reveals her true evil intentions, seizing Ariel and then sealing up Melody in a cell. After warning Melody that her time as a mermaid is almost up, Morgana surfaces with Ariel on a high platform, but soon after, she comes under attack from an arriving Triton and Eric and their respective small armies. However, since she is in possession of the trident, she quickly proves to be more than a match for them.

Melody eventually transforms back into a human, putting her in grave danger of drowning, but Tip and Dash comes to her rescue, breaking her cell open by having Morgana’s shark Undertow smash into it. After they get Melody to the surface, Morgana starts using the trident to make everyone present bow to her. While she is distracted with this, Melody scales her platform from behind and sneak attacks her, getting the trident away from her and back into Triton’s hands. Triton then uses it to encase Morgana in a block of ice forever, and she sinks to the bottom of the sea.

After her parents apologize to her for not being honest with her about her heritage and about why the wall was put up around their home, Melody is offered a choice by Triton: Join him in Atlantica as a mermaid or remain with her parents on land. Melody chooses something much better: She uses his trident to disintegrate the aforementioned wall, and the humans and merpeople are reunited.

LONG VERSION:
Tip and Dash lead Melody to Atlantica, and they all sneak into King Triton’s throne room. As Melody removes his trident from its stand, her locket falls off of her neck, but because Triton, Ariel (who was turned back into a mermaid by her father to search for Melody), Sebastian, and Flounder are heard approaching the room, she has no time to recover it, and makes a quick getaway with her friends.

The four enter the room and notice the empty stand and Melody’s locket. Realizing that Melody was here and that Morgana must have put her up to stealing the trident for her, Triton orders the search parties doubled. Ariel and Flounder then spot Morgana’s manta rays Cloak and Dagger (who were sent by Morgana to prevent anyone from interfering with Melody bringing the trident to her) trying to move away from the palace unseen, and after Ariel recognizes them as Morgana’s lackeys, she and Flounder follow them.

Melody, Tip, and Dash get back to the Arctic, and just as they near Morgana’s lair, Undertow shows up and frightens away Tip and Dash and then leads Melody to Morgana. Ariel and Flounder arrive minutes later, and Scuttle then makes a surprise appearance. Ariel orders Scuttle to find Prince Eric and Triton and alert them to the situation, and then she and Flounder enter Morgana’s lair and stop Melody just as she is about to relinquish the trident to Morgana.

After Ariel and Melody get over the shock of seeing each other as mermaids, Melody realizes that her mother has been a mermaid before, and – with Morgana preying on these feelings throughout – tells her how hurt she now is over her not telling her about this, and also expresses her anger over the wall being put up around their home for seemingly no good reason. Ariel explains that she had done all of these things to protect her, but before she can explain that it was Morgana whom she was protecting her from, Melody hands Morgana the trident. Morgana proceeds to seize Ariel and then reveals her true evil intentions to Melody before sealing her up in a cell along with Flounder. After warning Melody that her time as a mermaid will be expiring soon, Morgana heads to the surface with Ariel.

Just as Morgana emerges from the water on a high platform, Scuttle arrives with Eric, Triton, and their respective small armies. Morgana uses the trident to sink Eric’s ship, then zaps Undertow with it to turn him back into his old giant shark self so he can deal with the armies, and then she has Cloak and Dagger pull Eric underwater to try to drown him. Scuttle then distracts Morgana, which enables Ariel to get loose from her grip, and she saves Eric with the aid of Sebastian. Sebastian later causes the rays to get tied up around a stalactite.

Meanwhile, Tip and Dash – who had spotted flashes of light emitted from the trident inside Morgana’s lair – enter the lair to find Melody, but they quickly run afoul of Undertow. As the sun sets, Melody is transformed back into a human, putting her in grave danger of drowning. However, she is saved from this fate when Tip and Dash frenziedly make Undertow smash through Melody’s cell door and into a wall, which stops him once and for all, and then they help Flounder get her to the surface.

Once they get up there, Morgana starts using the trident to make everyone present bow to her. While she is distracted with this, Melody scales her platform from behind, and just before Morgana can use the trident to obliterate Triton, Melody leaps up from behind and snatches it from her, then throws it to her grandfather. Morgana pushes Melody off of the platform while reaching in desperation for the trident, sending her plummeting to the ground, but Dash breaks her fall. With the trident back in his hands, Triton uses it to encase Morgana in a block of ice forever, and she sinks to the bottom of the sea.

Ariel and Eric apologize to Melody for not being honest with her, and Triton then offers Melody a choice of either joining him in Atlantica as a mermaid or remaining with her parents on land. Melody, however, decides upon something much better. The whole gang heads back to Eric’s castle, and there, Melody uses the trident to disintegrate the wall separating the castle from the sea, reuniting the humans and merpeople. As everyone jubilantly sings, Melody bumps into the young merman she briefly met in Atlantica, hinting at a future romance between them. 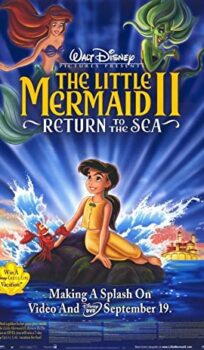