Pooper:
Audrey II eats Seymour and his spawn are sold throughout the US. The film ends with various, giant Audrey IIs taking over the United States (before breaking the 4th wall and bursting through the movie screen).

Long Ending:
This pooper follows the director’s cut. In the theatrical cut, Seymour rescues Audrey, kills Audrey II via electrocution, and gets a happy ending.

Three singing narrators (played by Tichina Arnold, Michelle Weeks, and Tisha Campbell) introduce us to Skid Row – a hopeless part of the city where the residents live in poverty and despair. An orphan named Seymour Krelborn (Rick Moranis) lives in a struggling florist shop. He was taken in as a kid by the shop owner, a man named Mushnik (Vincent Gardenia). Seymour is hopelessly in love with his colleague Audrey (Ellen Greene), who is in an abusive relationship with her dentist boyfriend Orin (Steve Martin). Although Audrey secretly loves Seymour, she doesn’t think a life with him is possible given her rough history and his lack of prospects.

One day, during a total solar eclipse, Seymour finds a tiny, unusual plant. He puts it in the window, and the plant immediately begins attracting passersby into the store (cameo by Christopher Guest). Seymour names the plant Audrey II. Despite Seymour’s best efforts to care for it, the plant begins withering. One night, Seymour injures his hand and the plant begins moving. Seymour realizes that the plant is nourished by human blood and begins letting Audrey II suck blood out of his fingers. The plant grows and Seymour begins gaining notoriety, even appearing on a radio station (cameo by John Candy). Mushnik’s shop becomes very popular and profitable.

Audrey II soon grows too large for Seymour to be able to feed with his own blood. To Seymour’s surprise, Audrey II reveals it can talk (voiced by the Four Tops’ Levi Stubbs). The plant convinces Seymour to feed Orin to it, promising to help Seymour get rich and famous (and wind Audrey’s heart) and also end Orin’s abusive ways. Seymour visits Orin’s dentist office where Orin derives pleasure from torturing his patients (cameo by Bill Murray). Orin attempts to drill Seymour’s teeth without anesthesia but dies after overdosing on laughing-gas he was inhaling. Seymour takes Orin’s corpse, chops it up in an alleyway, and feeds it to Audrey II.

Audrey begins dating Seymour. However, Seymour’s efforts to feed Audrey II grow morally dubious. He lets the plant eat Mushnik (who witnessed Seymour chopping up Orin’s body) in order to stop Mushnik from blackmailing him. Ultimately, Seymour gets enough money to elope with Audrey and leave Audrey II behind.

On the night of the wedding, Audrey II reveals its true nature to Audrey before attacking her. Seymour returns to the store just in time to drag a wounded Audrey out of the plant’s mouth. As Audrey dies, she makes Seymour promise to feed her to the plant so that he can “care” for her even after death. Seymour honors her wishes and then goes to commit suicide. Before he can kill himself, a businessman (cameo by Jim Belushi) approaches Seymour and shows him that the plant clippings grow into mini Audrey IIs. Realizing that Audrey II will be unstoppable if allowed to live and spread, Seymour returns to the shop to confront the plant. Audrey II reveals that it is an alien and intends to take over the world. Audrey II breaks out of its pot (its roots forming feet) and eats Seymour.

The film ends as little Audrey IIs (derived from the plant clippings) are sold across the nation. The babies grow to massive size and, like the original, eventually kill their owners and break out of their pots. The Audrey IIs begin a reign of destruction, laughing merrily as the army is powerless to stop them. The plants take over the Statute of Liberty before ripping open the movie screen itself to jump out at the viewers. 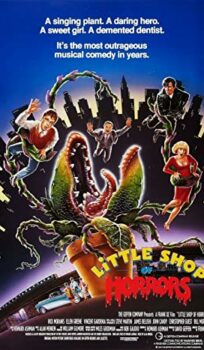